Old Mick Walandari Tjakamarra was one of the senior founding members of the Western desert Aboriginal art movement. He was active at the start of the Western Desert art movement but had a short career. He on Composition board  the stories of his country in a rough but spiritually accurate manner.

His Early paintings are small being less than 60 cm x 60 cm. Many of his early works are ritual and contain secret imagery meant only for the eyes of initiated men.

The aim of this article is to assist readers in identifying if their Aboriginal painting is by Old Mick Walandari Tjakamarra. It compares examples of his work. It also gives some background to the life of this fascinating artist. 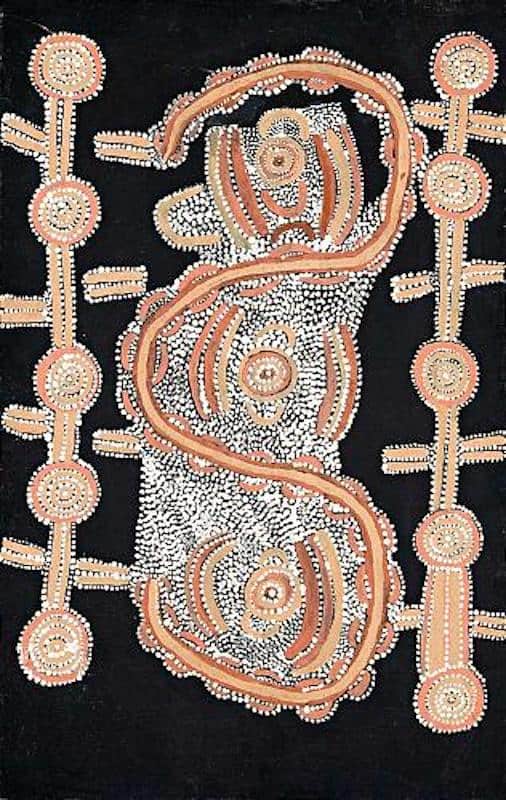 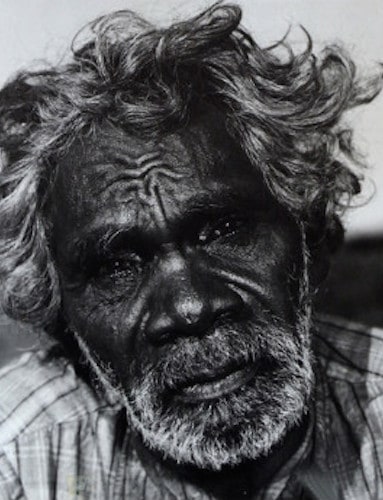 Old Mick Walandari Tjakamarra was born around 1910 at Watikipinrri, west of central Mount Wedge Mick had a mixed tribal background and is thought to have been one of the last surviving Kukatja of the Central Desert region.

His early life was that of a traditional nomadic hunter and gatherer. In the 1950’s he worked on cattle stations at Glen Helen and Narwietooma stations.

In the late 1960’s he resettled at Papunya. He was able to speak English well and often acted as a negotiator and trouble settler in the community.

In 1971 Geoff Bardon became a local school teacher at Papunya Primary. He had been unsuccessfully trying to encourage the school children to paint their traditional patterns. He had seen them drawing these patterns in the playground sand but they would not draw them on paper

When he was told only older men were allowed to draw these designs he came up with the idea of a mural.

Bardon soon realized he had to be given permission for a design by the tribal elders. This decision to allow an image that had only previously been created as a sand painting and seen by initiates was Monumental.  Mick was a traditional master and had been involved in supervising Kaapa who was already producing images for ceremonial purposes. Mick and other elders like Old Walter agreed to allow the painting. Although it was Kaapa with Long Jack and Billy Stockman who would end up doing the painting it was Old Mick Walandari Tjakamarra who gave permission.

After the success of the Mural, Bardon decided to start a men’s painting group. Walandari was one of the seniors of the group. He had great knowledge of traditional designs and stories. Old Mick was an acknowledged ceremonial leader and always maintaining a strong tribal interest. He provided a wealth of knowledge to his younger protégés in the painting group. 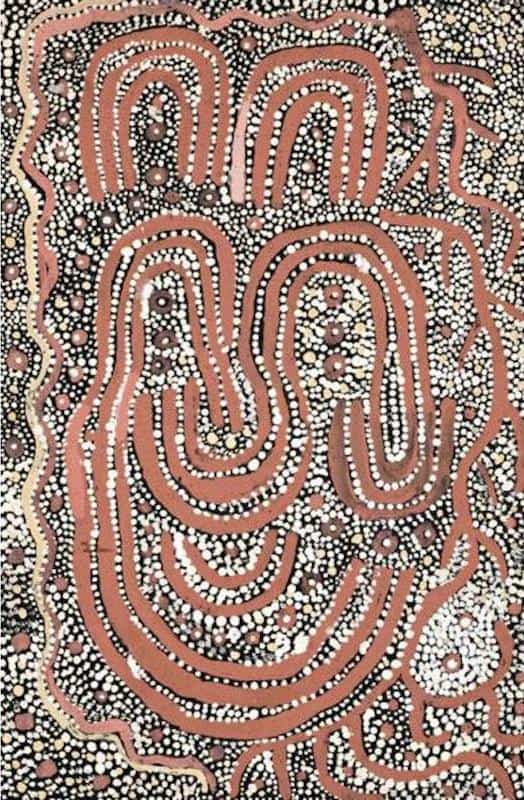 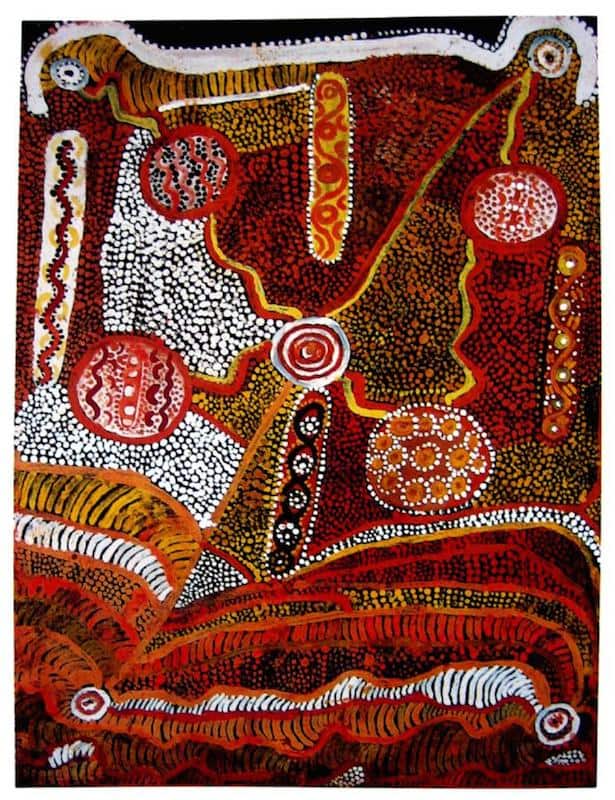 Old Mick’s paintings were not particularly neat or symmetrical. His dots came in clusters, often seeming to change direction as they encompassed the story components or allowed different areas to converge. His line work was poorer than many others but the stories his painting told were ancient and powerful.

On a literal level, these paintings are charts mapping the vast terrain of the Western Desert. They are born however of a deep spiritual connection to the land and this power reverberates in Mick’s art.

“Mick would paint his sacred stories while singing the songlines that the painting depicted. Mick sometimes used his fingers in the making of marks. It was a haptic mode of understanding and articulating story. It carried the same heightened emotional energy of a ceremonial dance. A silent singing of the great ritual, ” (Bardon 2004).

Mick painted Old Man’s Dreaming of Death 1971. It is now in the collection of the National Gallery of Victoria. Old Mick elucidated the passing between the earthly and spirit world. It is a great example of his work. it isn’t particularly technically proficient but tells a songline of extreme importance.

It is a solemn but warm and beautifully balanced symbolic rendition. Typical of Mick’s work it isn’t a masterpiece of technique or pattern it is a spiritual story.

The old man, represented by black half circles, lies in front of his campfire, accompanied by his sacred objects. He refuses earthly sustenance but his spirit is alive and strong. His black Tjuringa is counter-balanced by a red ochre Tjuringa that represents his totemic ancestor. The old man facilitates entry into the eternal world through a meditative practice. 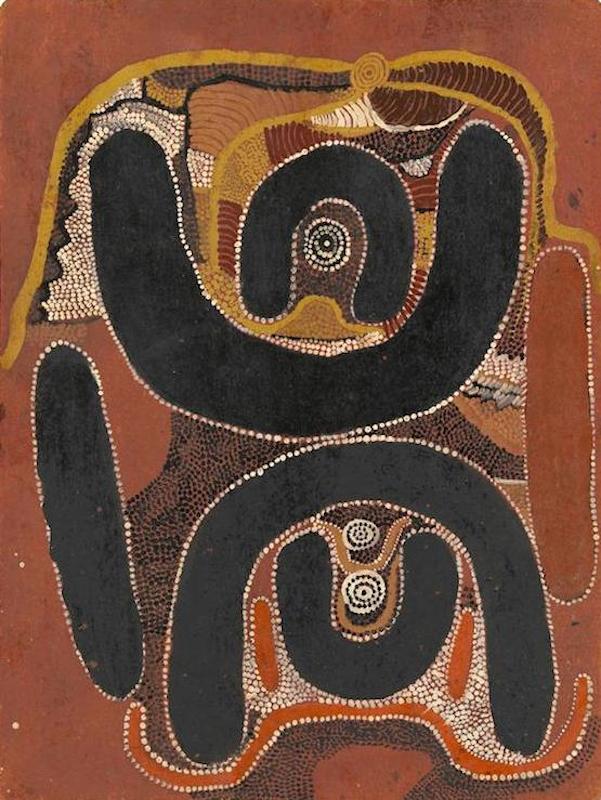 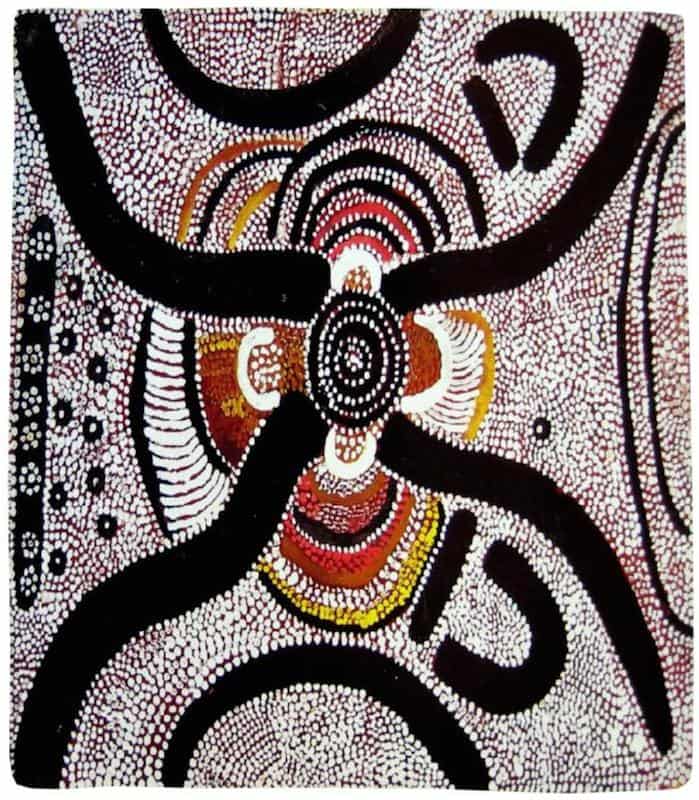 It took a while for Bardon to earn the trust of Old Mick. In time though Mick became invaluable in providing the meanings behind many paintings.

Old Mick’s paintings are compelling in their palpable sense of spiritual energy. They played a vital role in inspiring other painters. A certain roughness of technique accentuates this strength, He was painting to record stories and songlines and not for a commercial audience.

By the early 1980’s due to failing eyesight and bad health, Old Mick Walandari Tjakamarra could no longer paint. He continued to guide and help a number of ‘second wave’ artists, most importantly Maxie Tjampitjinpa and Don Tjungurrayai.

Old Mick’s Papunya works were the first to be collected by the National Gallery of Australia. They were featured in the Asia Society’s Dreamings: Art of Aboriginal Australia exhibition.  This exhibition toured North America in 1988-1989.

The following images are not the complete known work by this artist but give a good idea of his style and range. 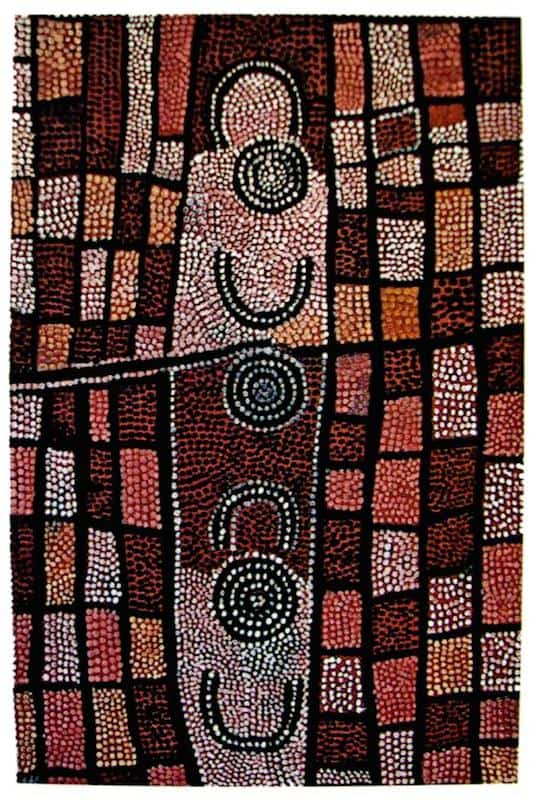 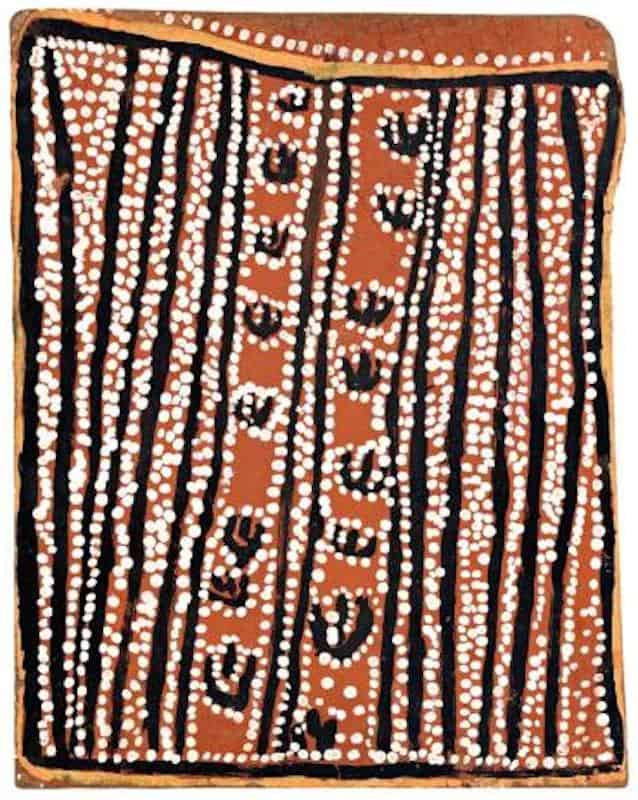 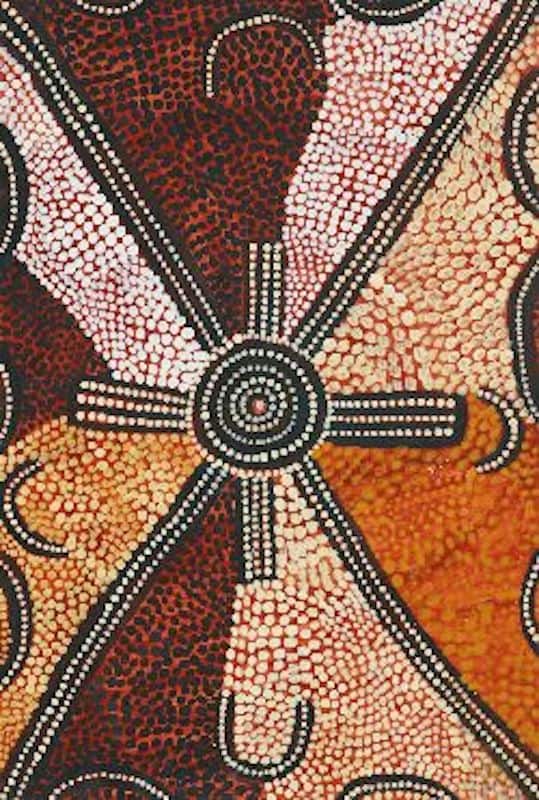 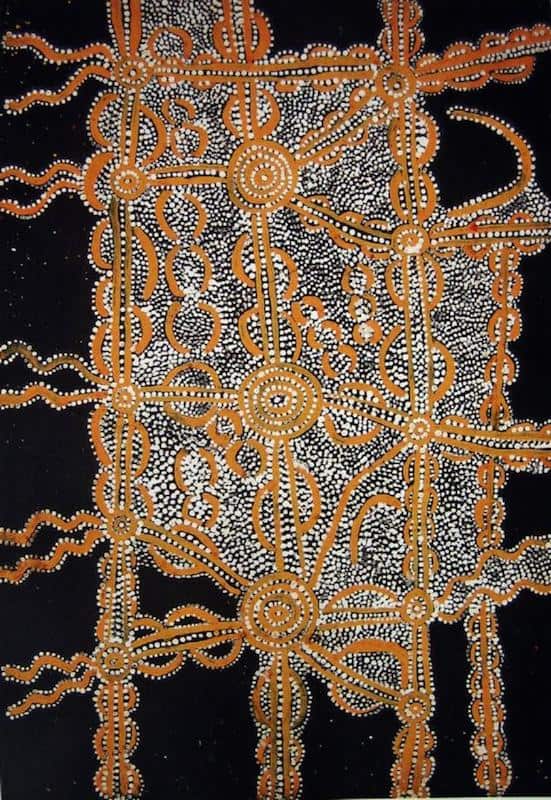 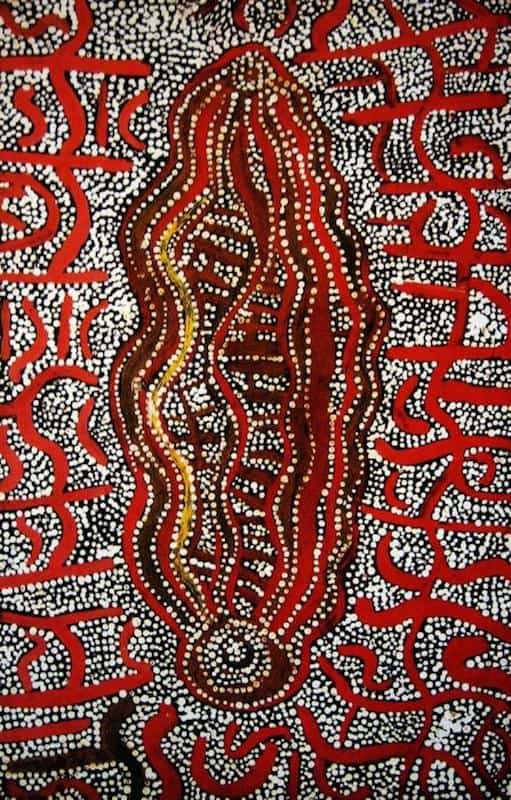 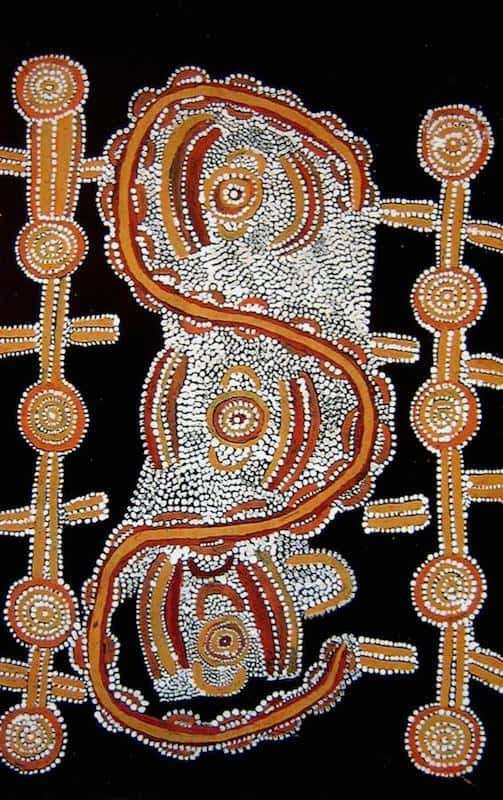 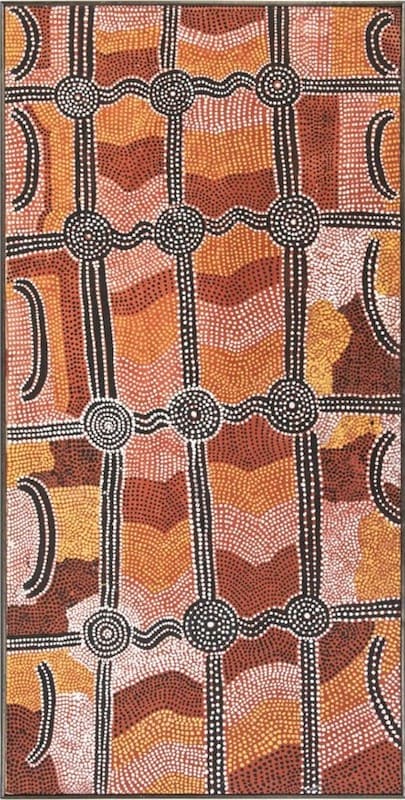 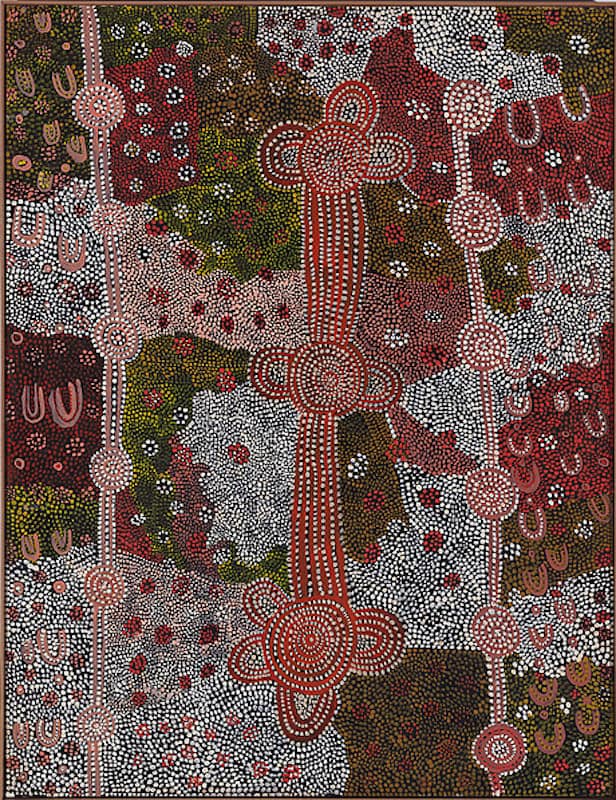 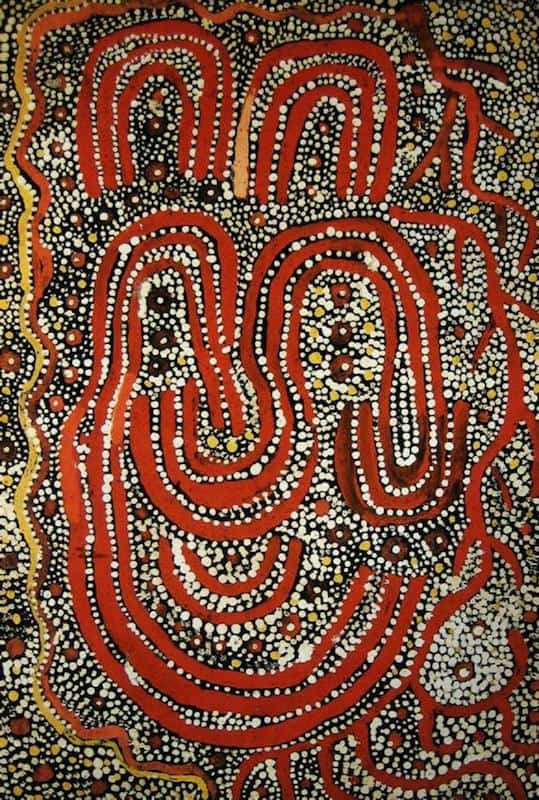 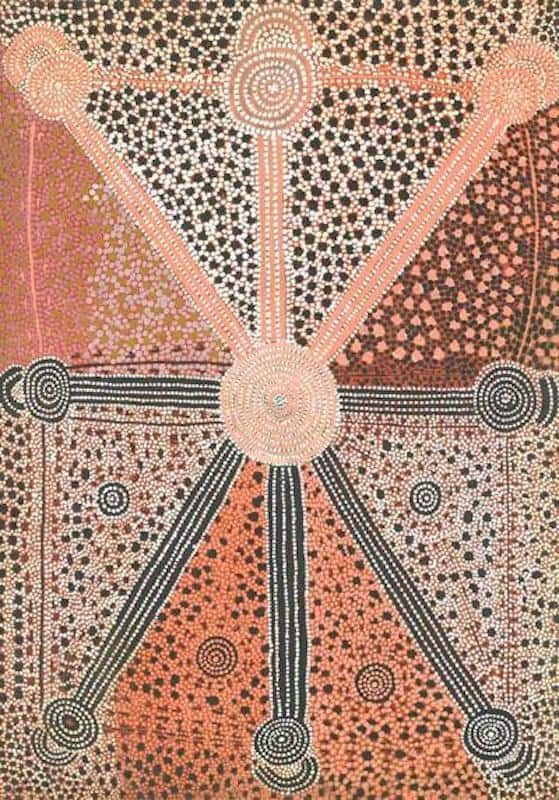 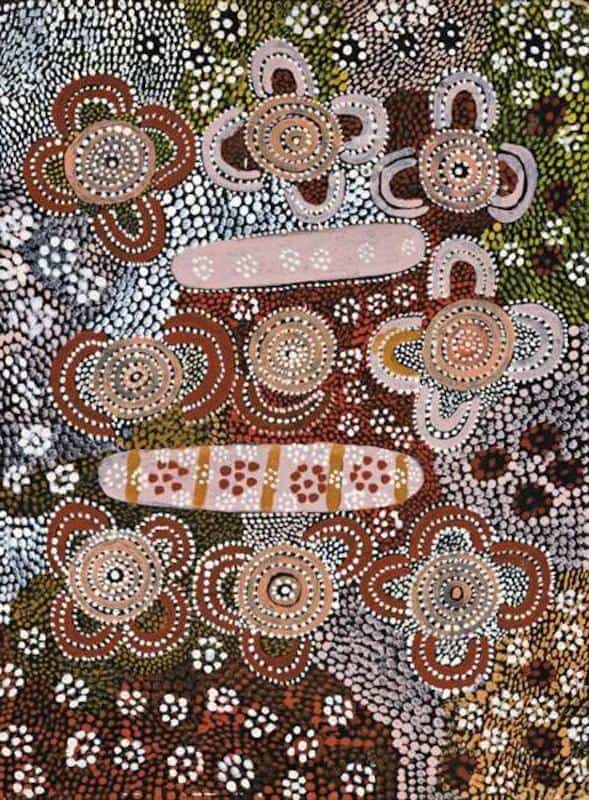 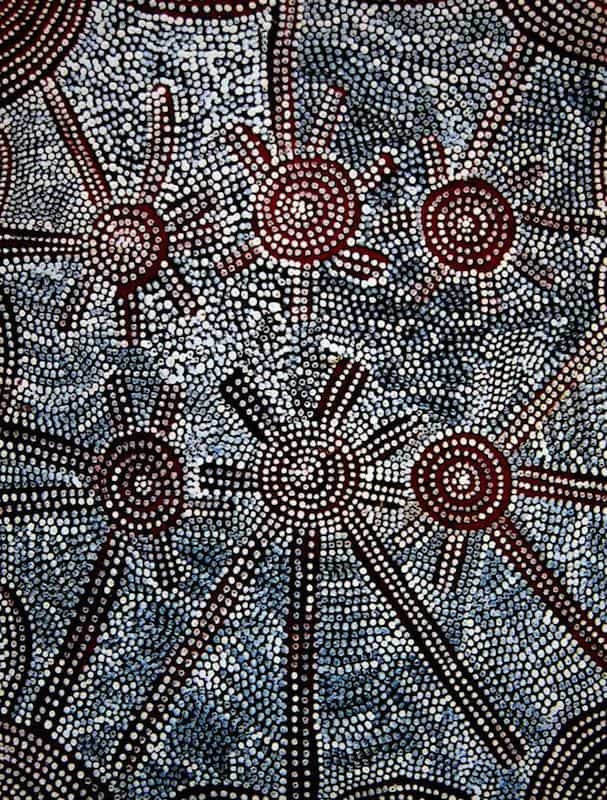 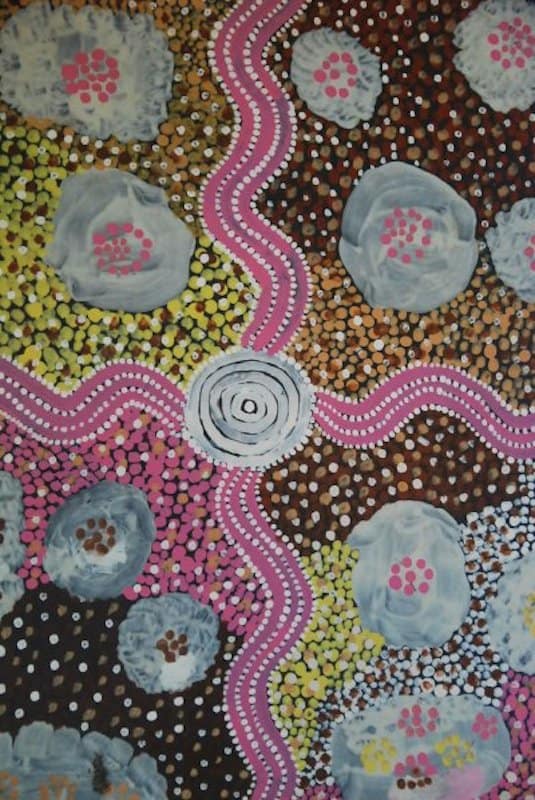 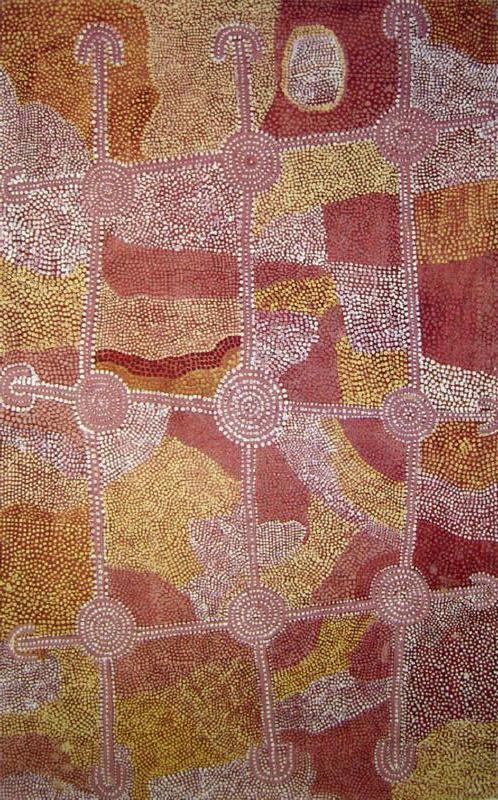 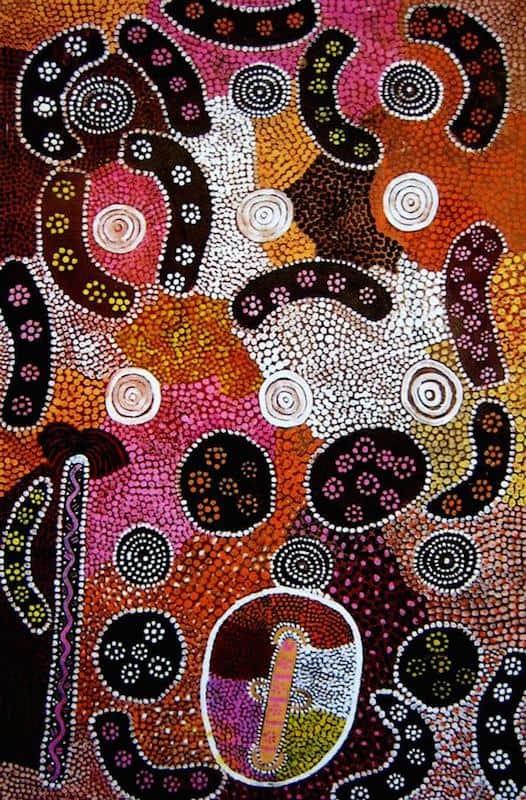 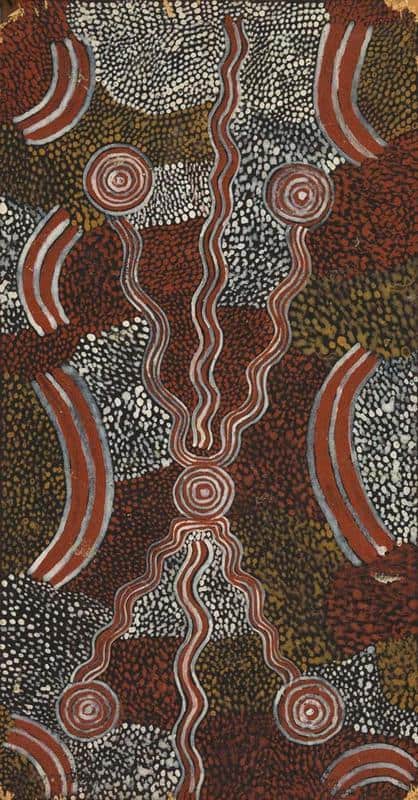 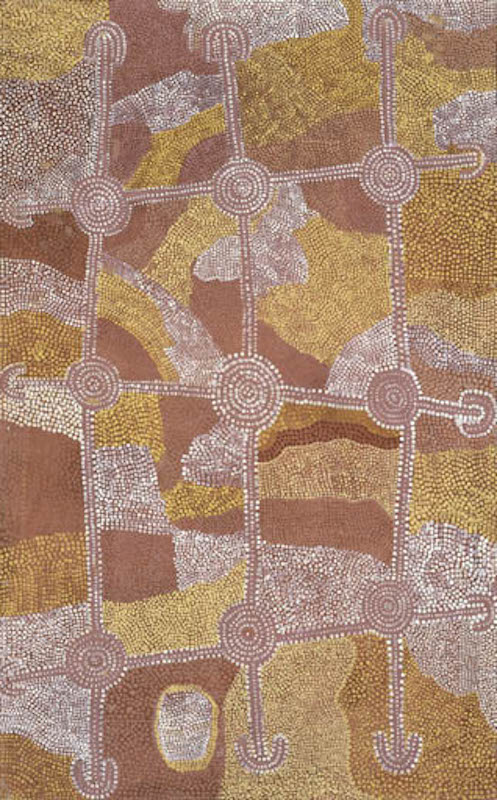 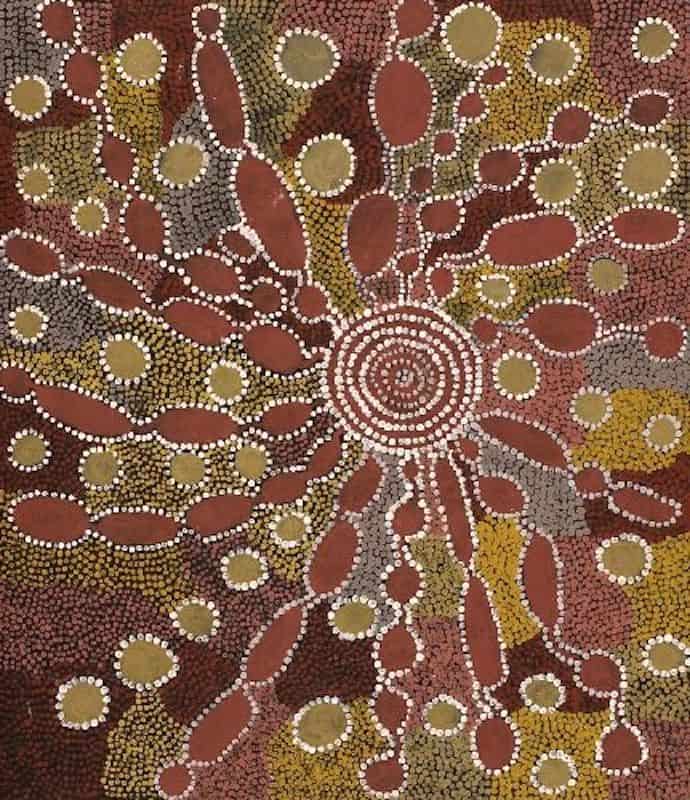 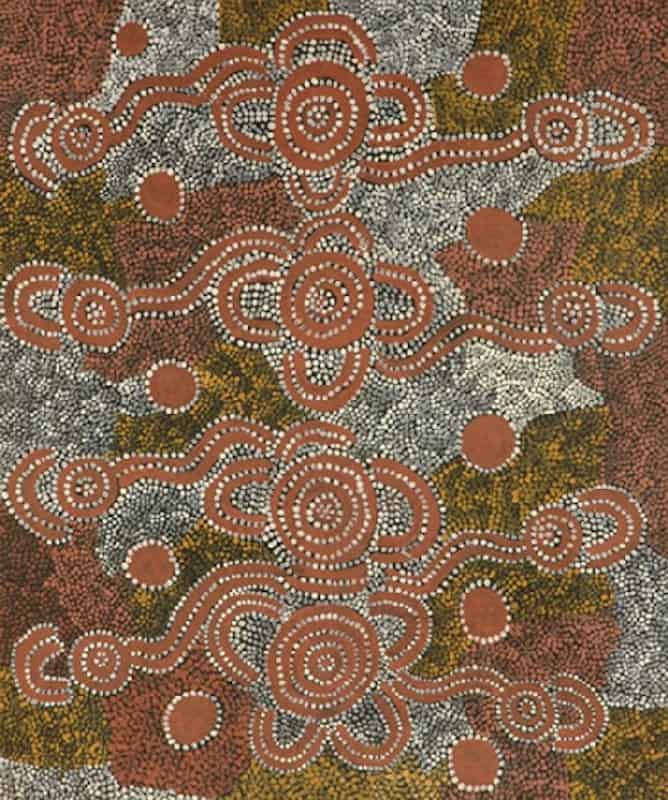 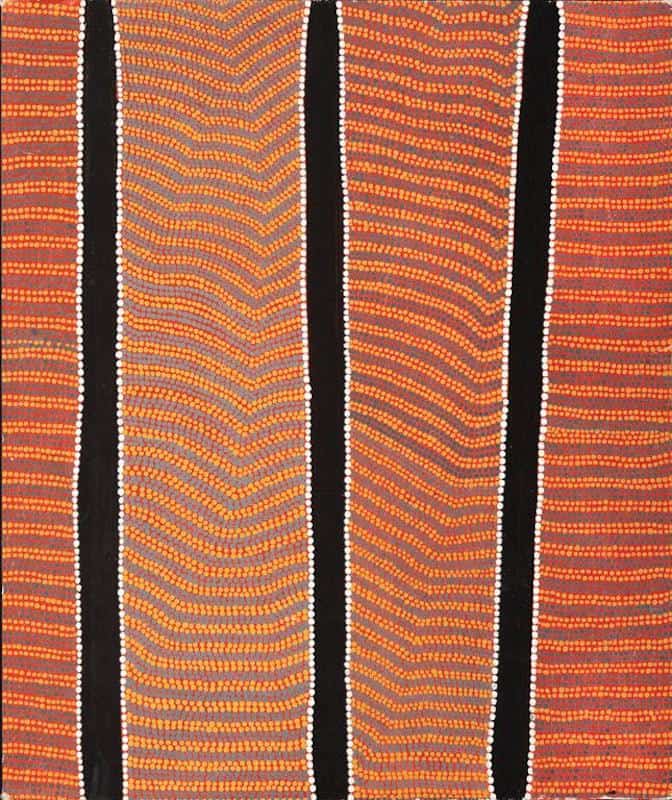 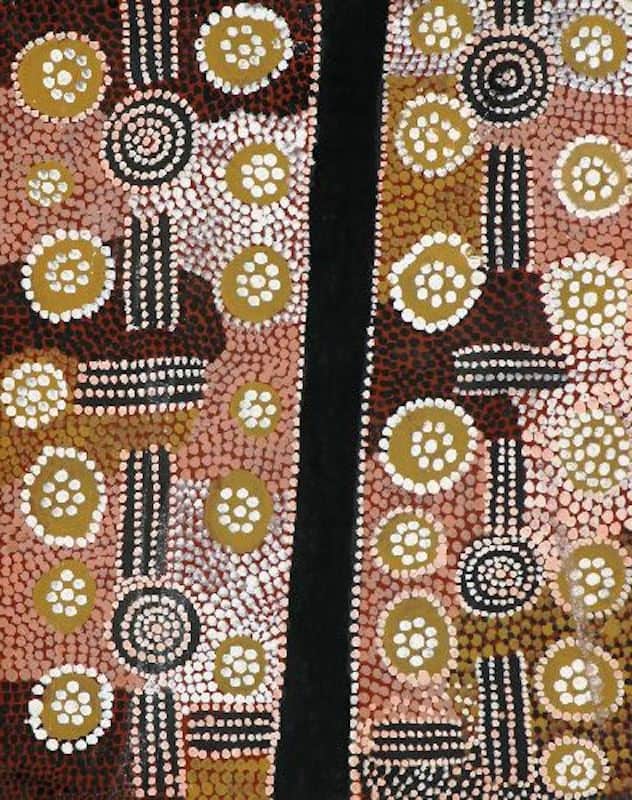 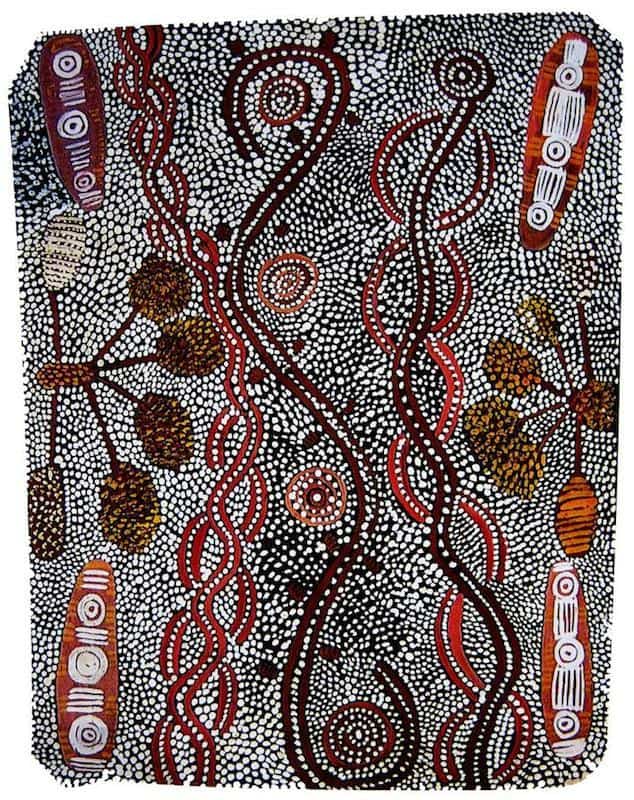 Papunya: A place made after the Story

Lives of the Papunya Tula Artists

home page
Sell
Early Papunya Artists
If this post has been informative please take the time and make the effort to share it on social media. By clicking any of the share buttons below you create a link from your social site to this article. Links are what google uses to calculate what information on the web is useful. By sharing this article you are letting google know you found my article / images of some value. Thanks!
← Old Mick Walangkari Tjakamarra Timmy Payungka Tjapangati →