Birrikidji Gumana was a renowned bark-painting artist and a leader of the Yolngu people. He was the father of another famous Aboriginal Artist, Gawirrin Gumana. The aim of this article is to assist readers in identifying if their aboriginal bark painting is by Birrikidji Gumana. It compares examples of his work.

Birrikidji bark paintings often have large monochrome figures or Totemic animals. These figures in panels of painted rarrk. His son Gawirrin has a similar style and the shares the same totemic animals. Birrikidji also painted barks depicting Macassan Prau (sailing vessels). These barks of Prau are often complete with their crews. He also painted several bark paintings of stingrays. These diamond shaped stingrays painted to become part of the rarrk design.

This diamond-shaped design is the property of the Dalwangu clan of the Yirritja Moiety and has its own story. The ancestral hero Laintjun came out of the sea in the Dreaming with the seafoam forming the diamond patterns on his body.  Laintjun taught the Dalwangu Clan how to paint the diamond pattern and the meaning of them.  When Laintjun first arrived from the sea as an ancestral spirit, he assumed a human form.  He later searched the Arafura swamp and found and ate the “Sacred Honey Comb” and so became a spirit man.  In time he became the greatest warrior and hunter in all Arnhem Land.  When he came out of the sea he brought with him all the Yirritja totems and distributed them to all the Yirritja Clans.

Birrikidji Gumana is also known to have carved and painted at least one hardwood Aboriginal Figure. 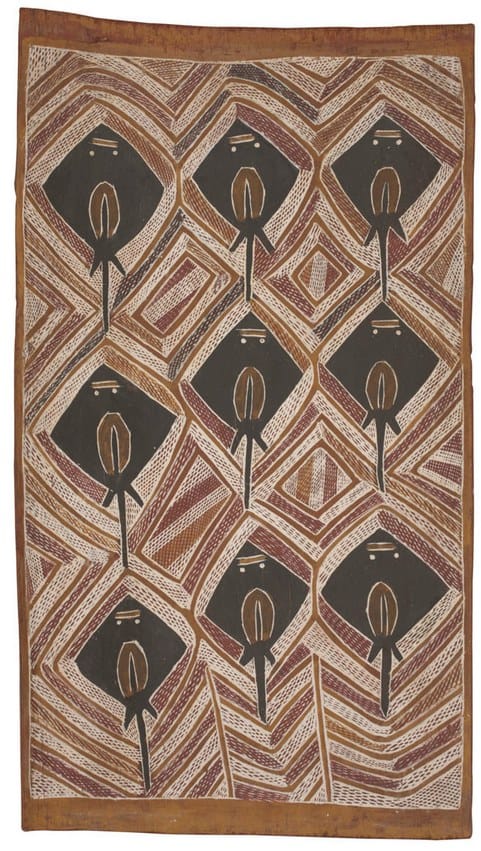