Namarrkon is the subject of several bark paintings and cave paintings by Oenpelli Artists. These artists have different depictions but all the depictions have similarities.

If you have a Namarrkon painting to sell please contact me. If you just want to know what your bark painting is worth please feel free to send me a Jpeg.  I would love to see it.

The lightning spirit is usually depicted with stone axes on their knees and elbows to make thunder. They often have lightning extending from the top of their heads. 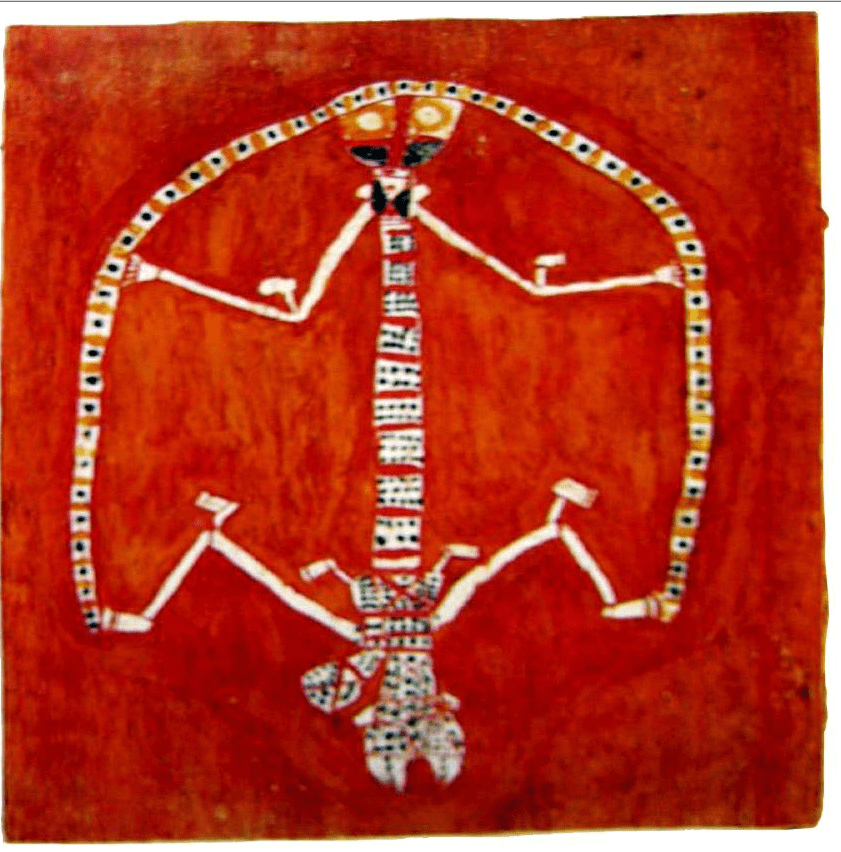 Namarrkon is the lightning spirit, the source of the fierce tropical storms in Western Arnhem Land during the wet season. During the dry season, he lives in a billabong not far from Numbuwah, a sacred rock in Western Arnhem Land. He only ventures out occasionally to hunt for food around his lagoon. In the wet season, Namarrkon lives among the storm clouds. He sits in the clouds looking down and watching the people below. This is the time he gets angry and creates flashes of lightning, loud thunder and then torrential rain. From late October his thunder signals bush food is ready to harvest. This is the start of the ‘build-up’ season before the proper rains come.

Namarrkon’s presence gets stronger through the wet season. In January and February Namarrkon strikes trees and splits them with his axes – causing lightning. His presence and hence the monsoon season subsides in early March. Namarrkon’s body is like a praying mantis. He makes lightning flashes with lightning rods that go around his body. These flashes extend from his ears to his genitals. No one ventures near this lagoon or touches the bush food near Namarrkon’s camp. He remains undisturbed and happy and only growls in his ‘thunder voice’ if someone comes too close. Namarrkon is also described in song and dance. 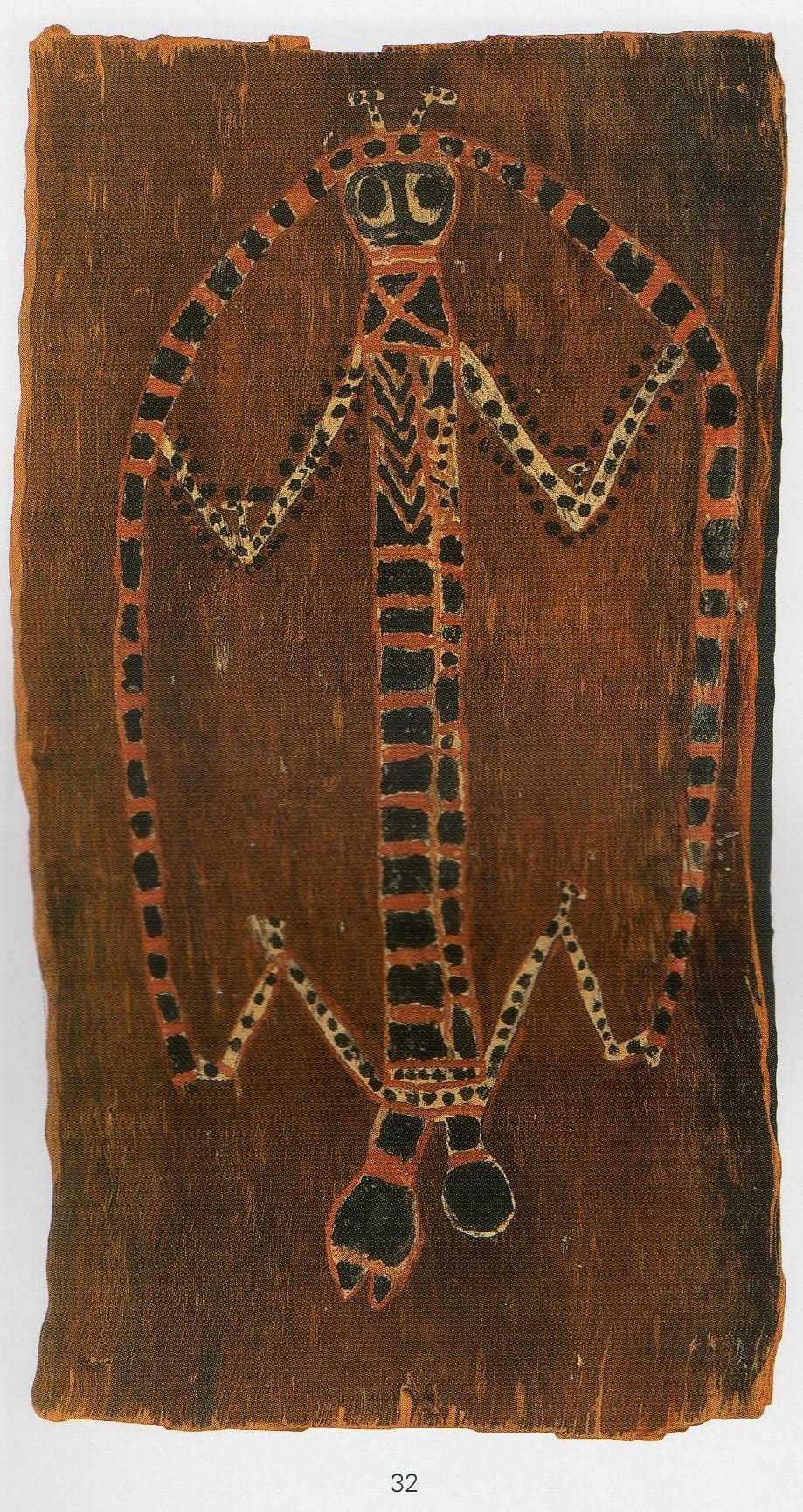 Nym Djimurrgurr is probably my favorite artist for depicting Namarrkon. He depicts the spirit with enormous genitals and in a rough archaic manner. His depictions are full of energy and menace. (Left). He was also known as Charlie Barramundi

Bark painting of a female Lightning spirit by Mick Kubarrku with axes on the shoulders and waist. (Right) 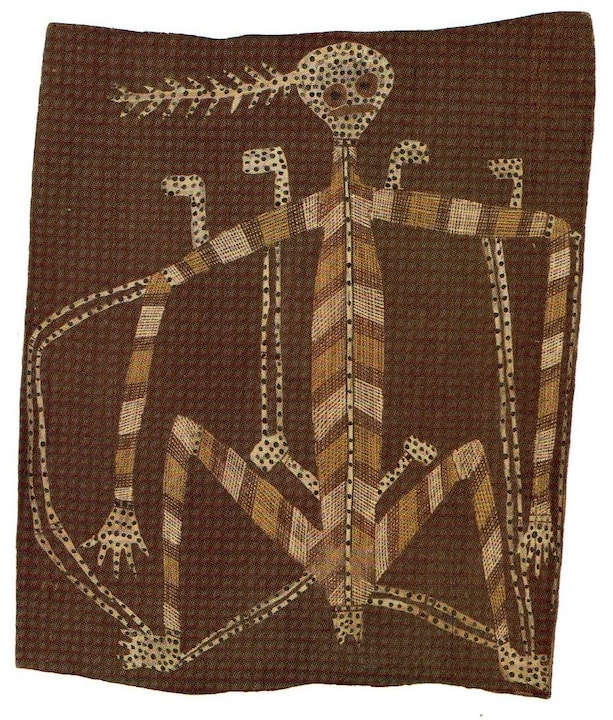 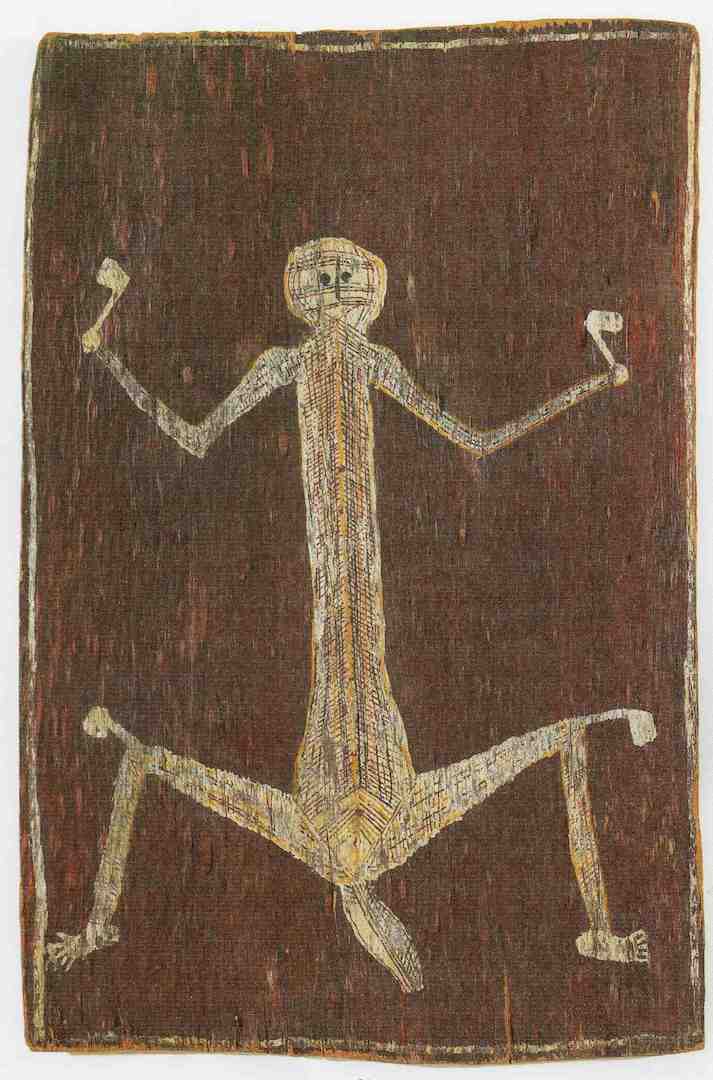 I have only one image of a Namarrkon depicted by Djambalulu. It lacks the ring of lightning but still has the distinctive stone axes (Left).

John Mawurndjul depiction of the Lightning spirit lacks the stone axes on the knees. It does however still have the halo of lightning from the top of the head (Right) 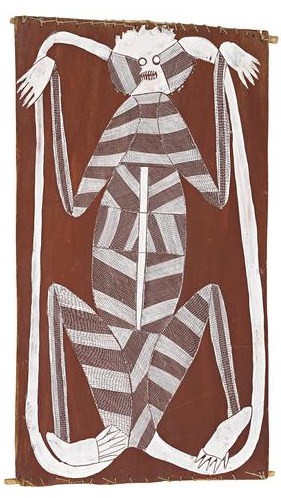 Bark painting  of Namarrkon by Jimmy Midjau Midjau with stone axes on the knees and elbows. Hallow of lightning right around the body (Left)

Dick Murrumurru Ngueleinguelei depiction of the Lightning spirit with lightning from testicles to the top of the head. (Right) 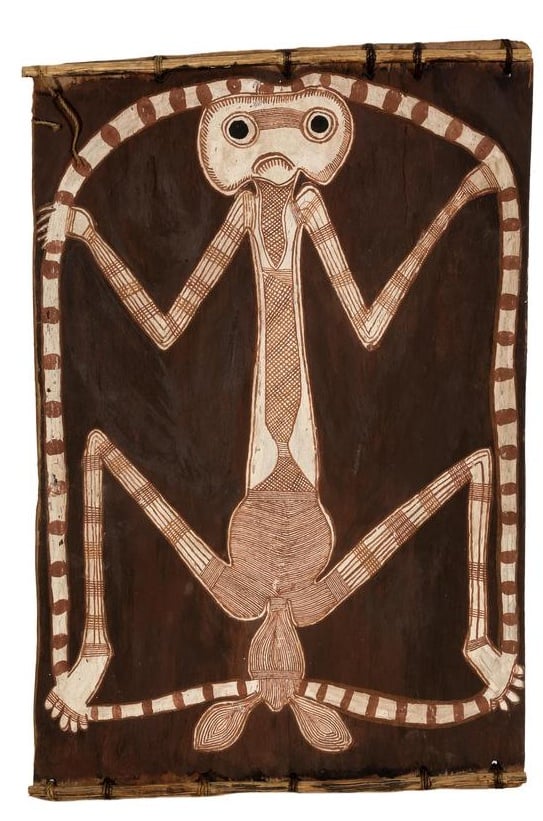 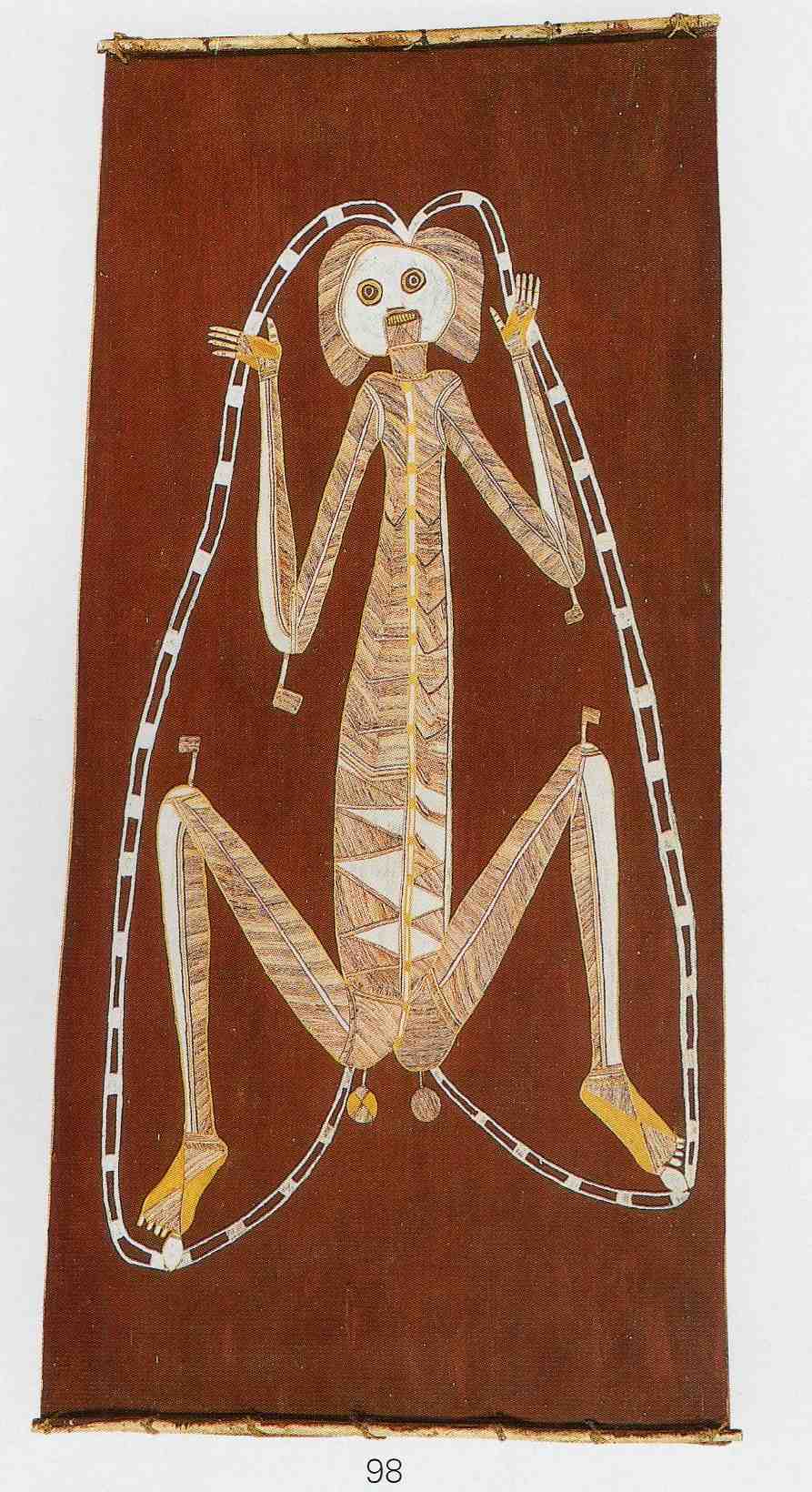 Lofty Nadjamerrek bark painting of the Lightning spirit. Lightning coming from the head and axes on knees and elbows.

Nadjombolmi depiction of Namarrkon as a female spirit. Lightning coming from the head and axes on knees and elbows. (Right) 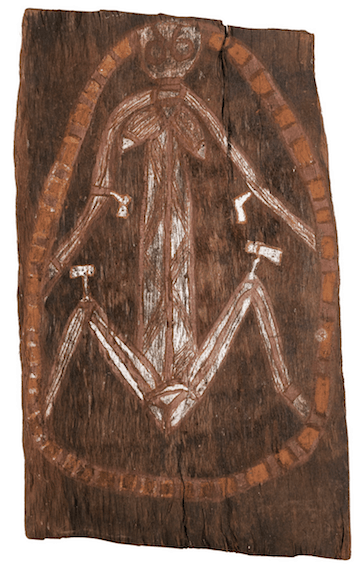 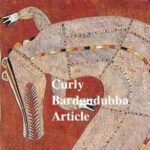 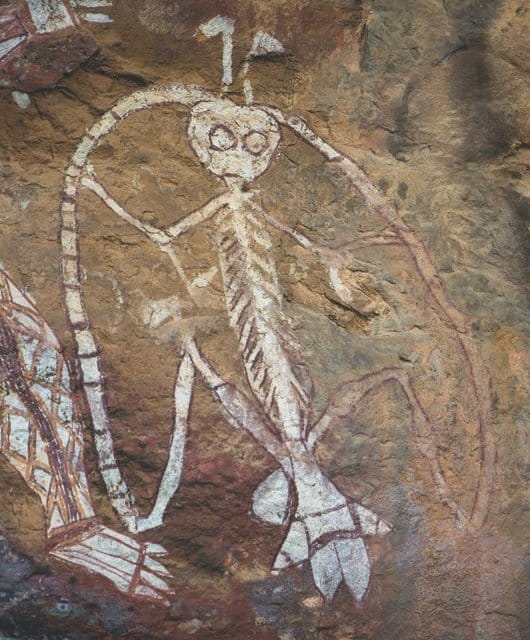 Home Page
Contact Me
Gallery
If this post has been informative please take the time and make the effort to share it on social media. By clicking any of the share buttons below you create a link from your social site to this article. Links are what google uses to calculate what information on the web is useful. By sharing this article you are letting google know you found my article / images of some value. Thanks!
← Teeampi Ripijingimpi Lipundja →