Port Keats painting tend to be on oval pieces of bark or square with rounded corners. The earlier paintings of this region are the most collectible and have churinga-like designs.

Painting on bark in Port Keats started in the late 1950s. 64 paintings were commissioned and collected by George Chaloupka a rock art specialist around 1958.

Prior to this date, the designs found on these early barks were incised into sacred wooden boards. Port Keats locals did paint weapons and on stones but painting on bark may have been for European demand.

By the 1960s the Catholic Mission would buy artworks from local artists at the mission store. Bark painting had become a small mission-run cottage industry.

If you have what you believe to be a Port Keats Painting I would love to see it. Please send ma an image and the dimensions. I am happy to give you an idea of the value and if it is an early example make an offer to buy it. 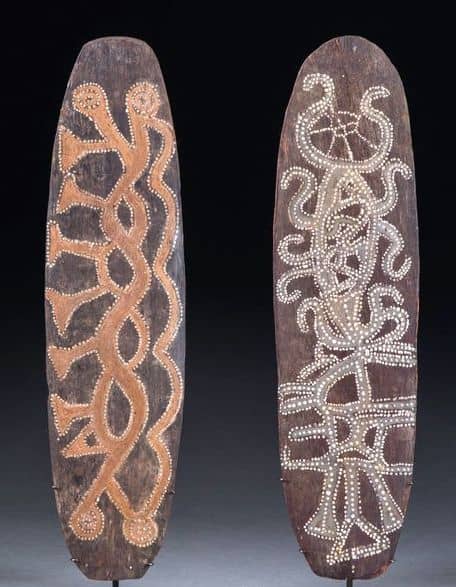 The early phase of churinga-style design paintings in the 1960s was replaced with increasing European imagery. These later European imagery barks often had ceremony or totem animals as the main theme. They still have meaning and relate to traditional dreamings but the physical representations lack the mystery of the pure traditional design.

The designs on the early Port Keats paintings are similar to those found in the western desert. The iconography of concentric circles and parallel travelling lines are similar because the cultures are related. Unlike central Australia where the iconography leads to the explosion of the Western Desert art movement, Port Keats’s painting flourished and then faded. The main reason for this can be explained by how the different groups dealt with sacred symbology.

In Port Keats, the artists moved away from traditional symbols to European iconography. In the Western desert the iconography was disguised with dots leading to aboriginal dot art.

The other significant difference is that Port Keats painting was only ever painted on bark. The fact that the same artist never had the opportunity to paint on board or canvas hindered any potential art movement. Paintings on bark are still considered ethnographic curiosities whereas paintings on canvas are considered abstract art. 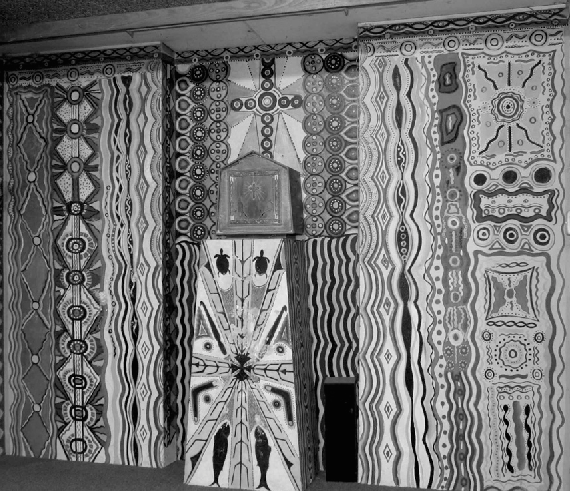 Many of the earlier bark paintings collected  do not have an artist name recorded.

Depending on the beauty of the design some of the paintings by unknown artists still have value. It is sometimes possible to attrute the artwork to a particular artist.

Information on Port Keats artists was poorly recorded. There was no collector or dealer that took photos of the artists or record the stories told on the barks. It is for this reason these barks no matter how beautiful will never be worth the same as early western desert art. In many ways this is an oversight by early collectors because the artworks produced predate western desert painting by decades.

If you know more about any of these artist please contact me. I would love to be able to present a fuller picture of the artists life. 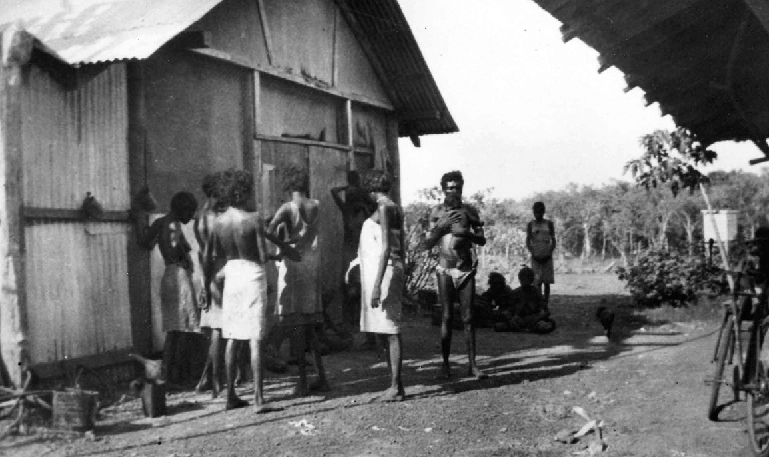 Charlie Mardigan was the most prolific and I believe the best of the Port Keats Artists. Some of his better works I believe rival those of the early Papunya Artists and rely strongly on traditional design elements.

Bobyin Nongah was an aboriginal artist working in Wadeye (Port Keats) in the 1960s and 1970s. His main dreaming and subject of most of his paintings is the rainbow serpent or Kunmanggur.

Indigenous Australian Artist Nym Bunduk is one of the few known painters of the Port Keats area. His early paintings are mainly of churinga-style designs painted on oval pieces of bark.

Charlie Brinken (Newili) is an aboriginal artist from Wadeye (Port Keats) who painted in the 1960s and 1970s. He is best know for his bark paintings of churinga-like designs and ceremonial scenes.

There is virtually no information available on this artist. Charlie Rock Ngumbe spoke Murrinh – Patha language and was born around 1910. 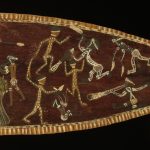