Indigenous Australian Artist David Malangi is best known for an artwork published on the Australian One Dollar bill. He was a prolific artist who painted for over 30 years. His most collectible paintings depict a Mortuary Feast of the first man.

If you have a David Malangi artwork and you want to sell or value it please send me an image and dimensions. 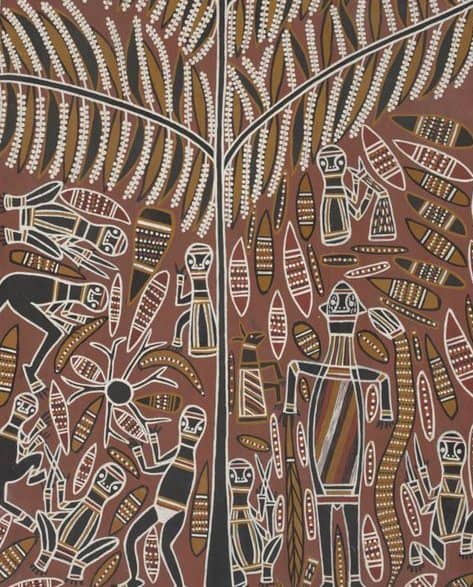 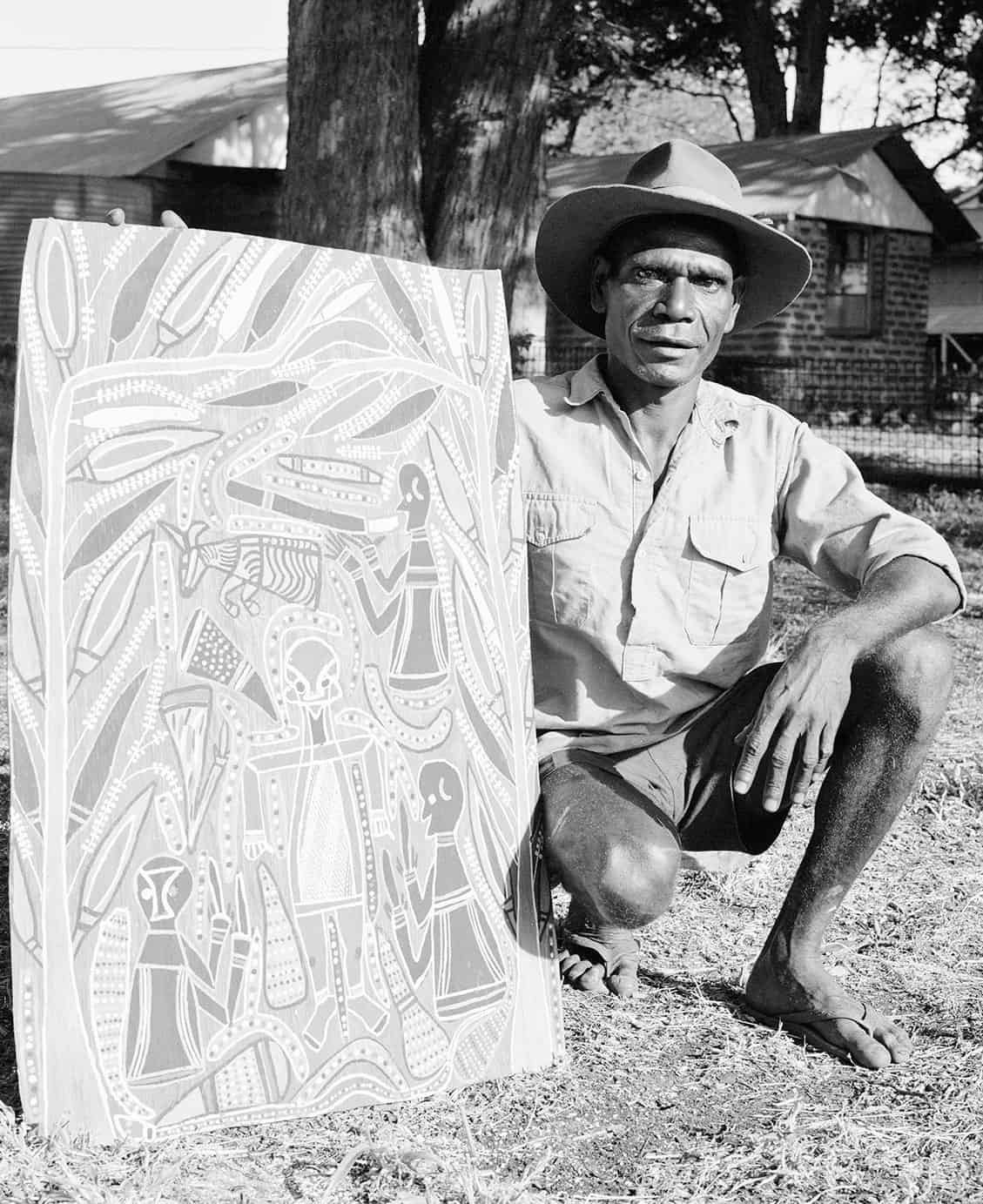 David Malangi was born in 1927 in his country of Malanga near the mouth of the Glyde River in Central Arnhem Land. He spoke Manharrngu Language. As a child, he and his parents moved to the Methodist Mission on Milingimbi Island. As a teenager, he worked on the mission as a garden laborer and caring for livestock. He was also initiated and started to paint for traditional ceremonies. During the war, the Milingimbi mission was abandoned. David along with other artists like Dawidi and Binyinyuwuy had to walk 600 kilometers to Darwin.

He moved back after the war and in the late sixties when his father died, he became ceremonial leader Ghawadanygulili’s apprentice. The Methodist mission at this time started to sell traditional aboriginal artworks to collectors. David soon realized he could earn more selling paintings than he could laboring. He took a serious approach to his art and developed his technique.

In 1963 one of David’s artworks collected by Kapka came to the attention of the Australian Reserve bank. The Reserve Bank decided to use the artwork as a part of their design on the Australian Dollar Bill. The artwork used without permission or acknowledgment of Malangi’s traditional ownership,

The design depicts the funeral of the first man, the hunter Gurrmirringu.

The central figure represents the deceased Hunter. The crosshatching on the body was traditionally painted by senior men before burial. A song group is sitting around the body playing the didgeridoo and beating the clapsticks. As they paint the body they sing the story of the deceased who was the great hunter Gurrumirringu.

The painting also tells of how Gurrumirringu died. One day he had an exceptional day hunting, killing a turtle, wallaby, emu, and many other small creatures as well as gathering wild yams and fruit. As dusk fell he decided to camp under a tree by a waterhole. He lit a fire cut up the wallaby ( see the dissected pieces in the painting ) and started cooking it on the coals. Unfortunately, the tree Gurrumirringu settled under was an evil tree. This tree had enticed a venomous brown snake to live at its base. The Whiteberry tree hated Gurrumirringu, and so persuaded the brown snake to slither out of hiding. The brown snake bites the great hunter on the ankle resulting in instant death.

This image depicts the first death of the Manyarrngu people and explains how Gurrmirringu’s spirit came to watch over them. 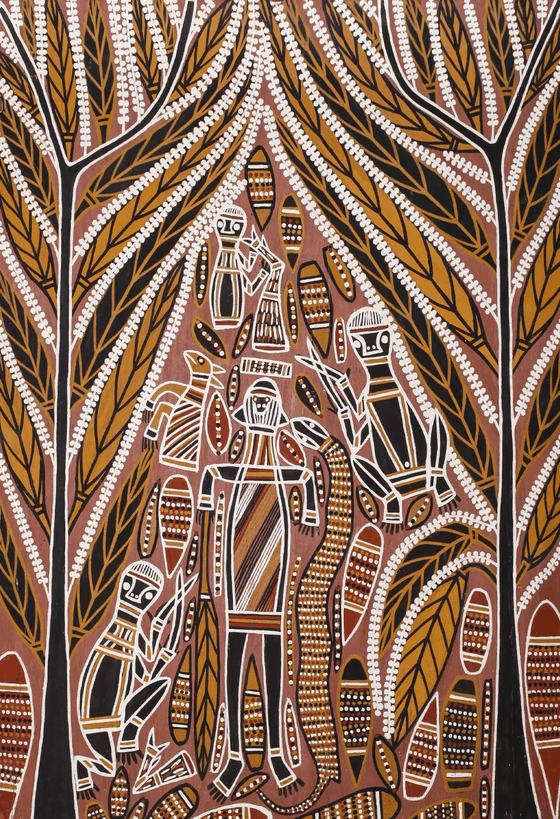 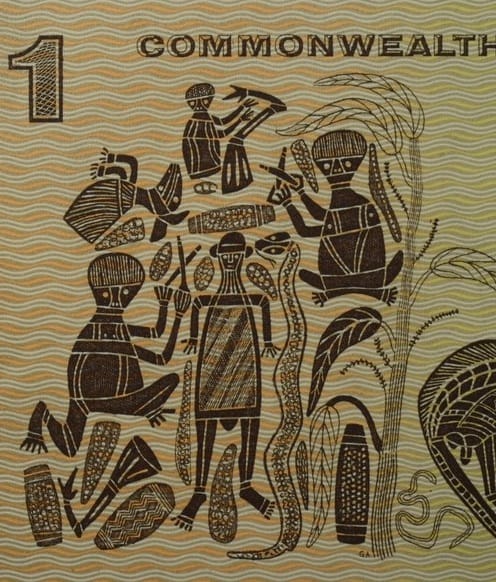 A European art collector Karel Kupka collected a David Malangi painting in 1963. He sold it to a museum in Paris. Sometime later McPherson of the Reserve Bank of Australia was in Paris and visited the collection. McPherson was so impressed with Malangi’s work that he requested permission to photograph it. In 1966, when Australia adopted decimal currency. The central motif of the original dollar note was a direct representation of this photographed painting by David Malangi.

This Dreaming had sacred significance and Malangi. He was a custodian of the story and initiated into the knowledge. When the one-dollar note came into circulation in 1966 he was deeply upset. The reserve bank was ignorant that different aboriginal people were custodians of dreamings. They considered aboriginal art to be communally owned and therefore not copyrighted under the law.

From a European perspective, the dollar bill made Malangi more famous as an artist. As the traditional custodian of a dreaming, it was deeply embarrassing to Malangi to have his heritage used without consent.

It wasn’t until twenty-three years after his Mortuary Feast design appeared on the dollar bill that Malangi would have his day in court. His ownership of the images was upheld. This proved a benchmark case establishing copyright for all Aboriginal artists. He received one thousand dollars for the designs. More significantly he received a specially struck medal acknowledging his copyright.

Malangi painted profusely through the 1970s as Aboriginal art was entering the forefront of the Australian art scene. In 1983 he was one of the first Aboriginal artists included in the Sydney Biennale. Later that year a suite of paintings appeared in Australian Perspecta at the Art Gallery of New South Wales. These paintings constituted an incontrovertible land rights statement. The paintings later contributed to a successful land ownership claim by his people.

Throughout the late 1980s, Malangi was sought out to participate in other major exhibitions. He was the face of Arnhem Land Art. Exhibitions included Dreamings: The art of Aboriginal Australia in New York.

Most of this period he spent painting in the freshwater region of Yathalamarra. He had four wives and many children.

In 2004 the national gallery of Australia held a major retrospective exhibition of his works. No Ordinary Place: The Art of David Malangi. 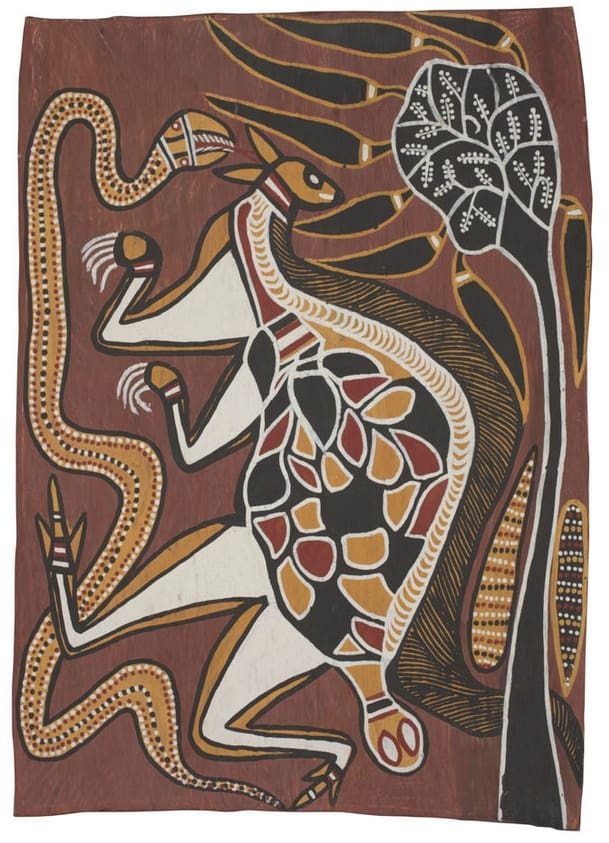 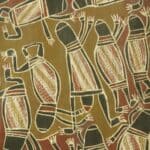 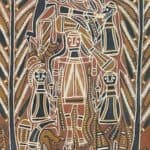 The following images are of the Artwork of David Malangi. It is not a complete list of his works. They do however give a good idea of the style and above all the variety of this Aboriginal Artist. 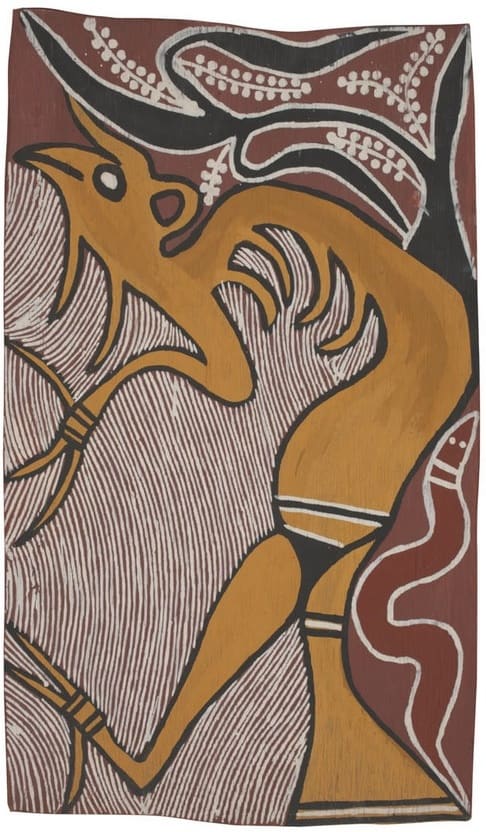 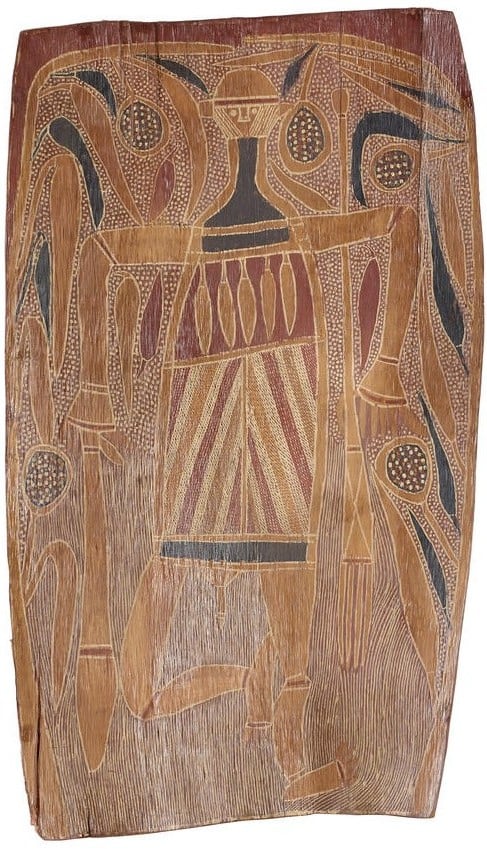 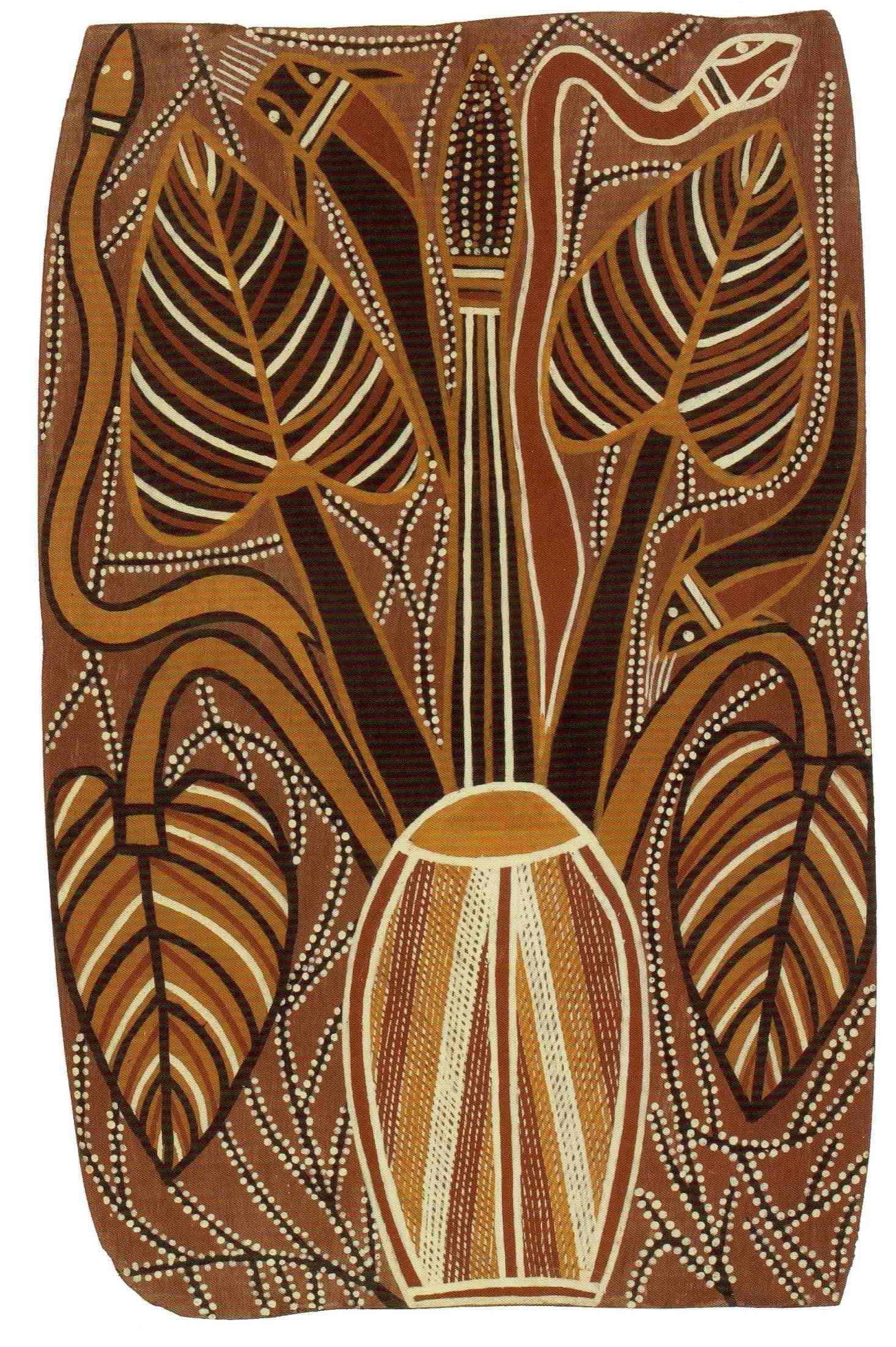 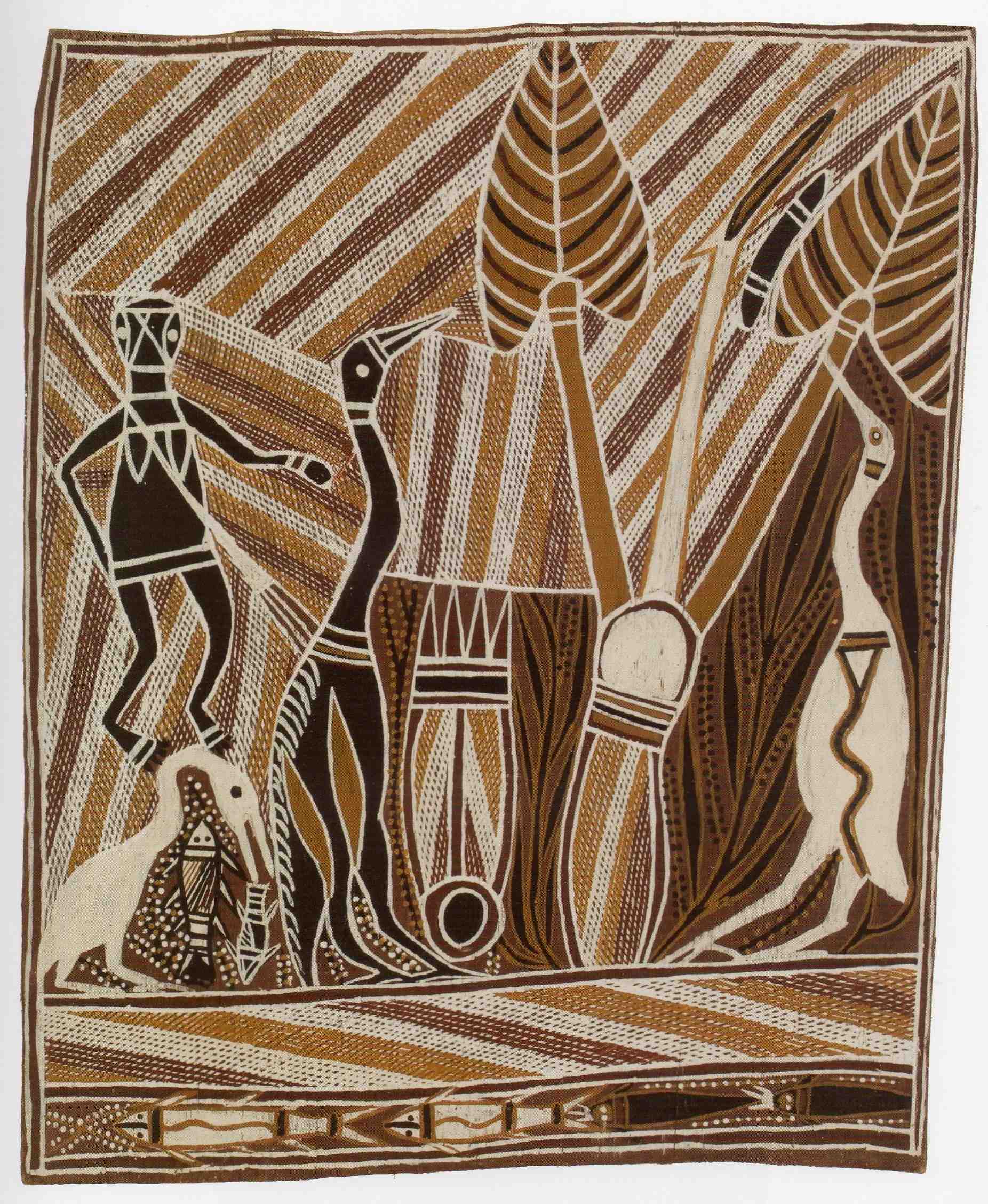 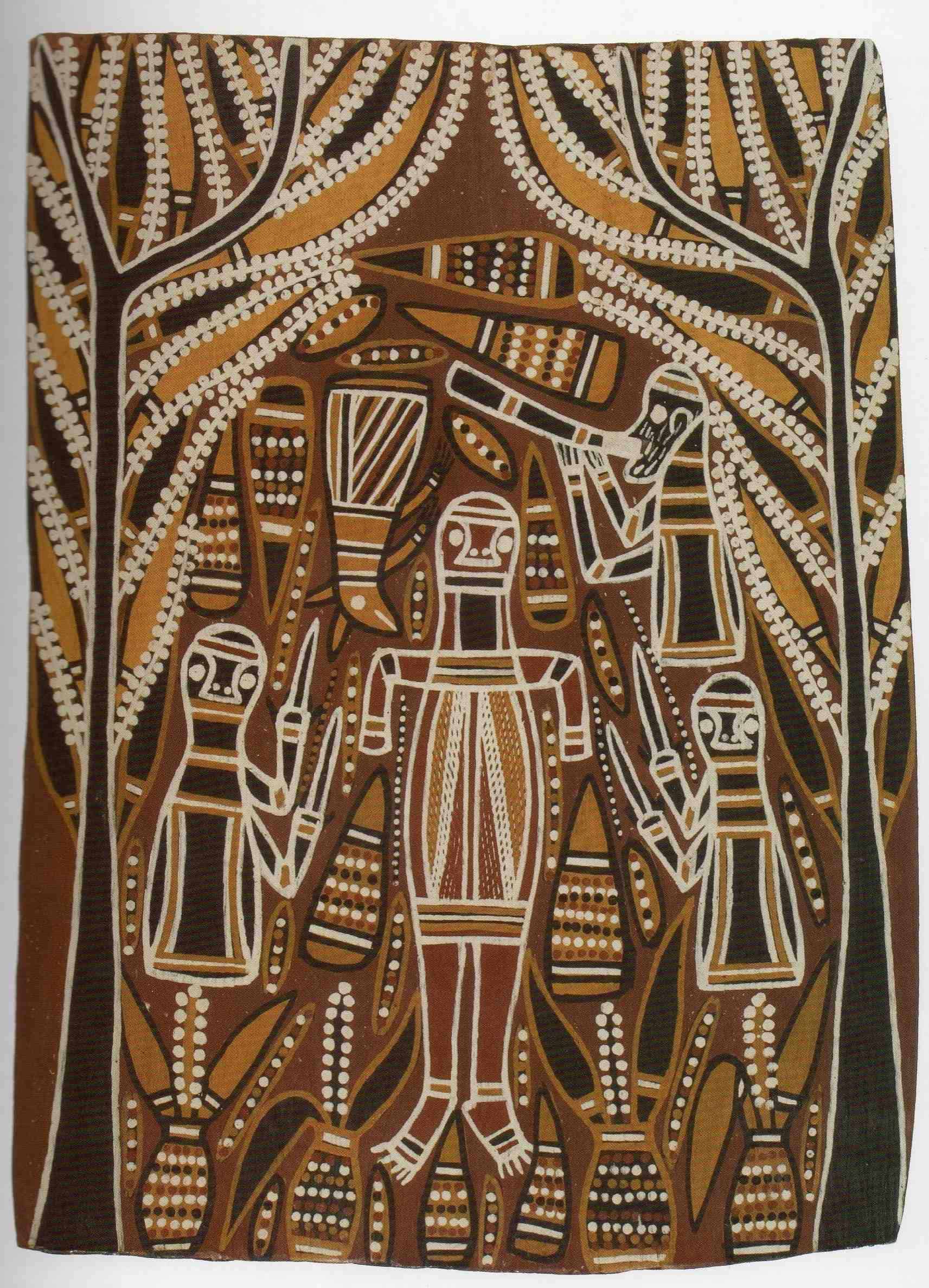 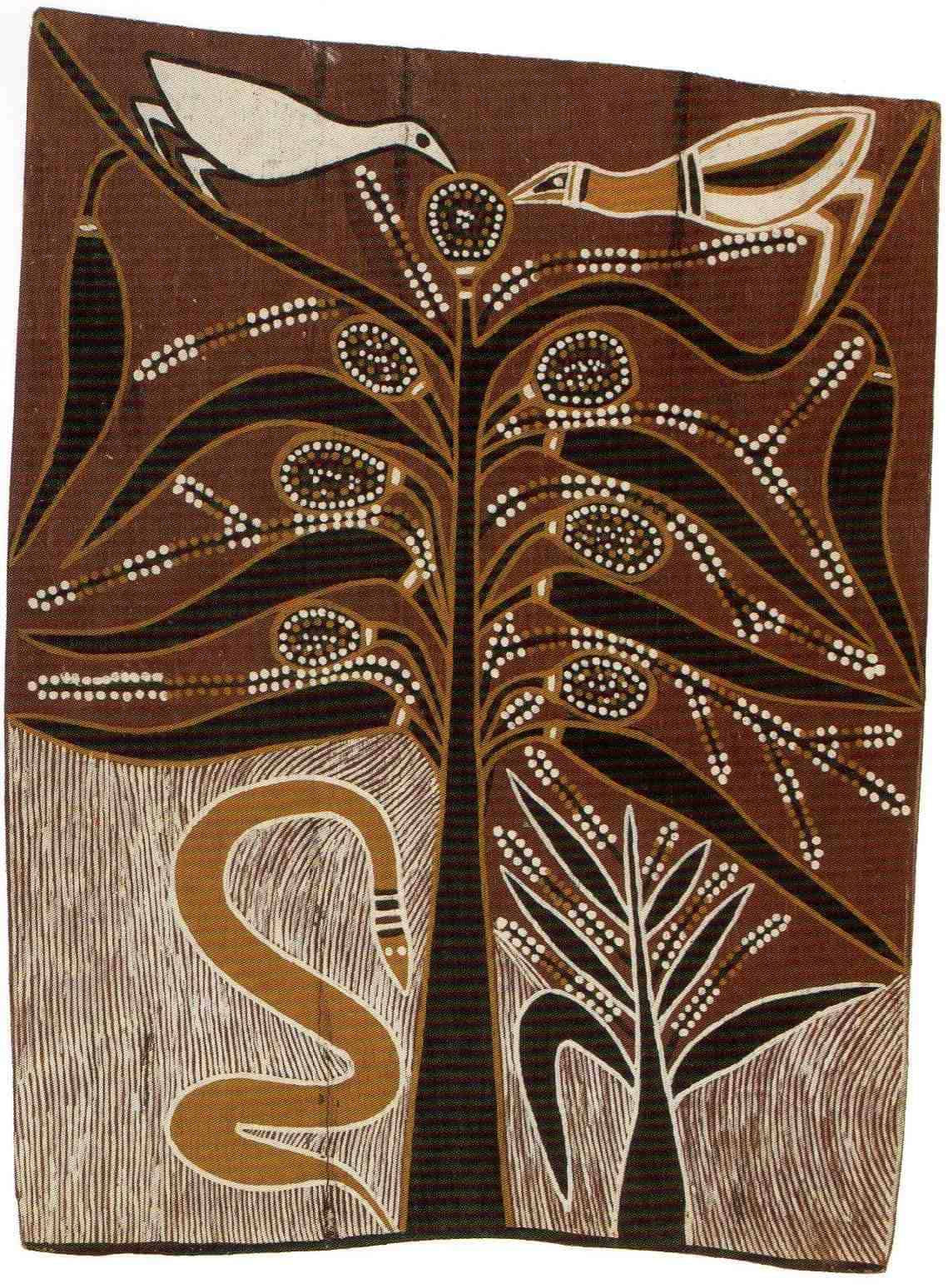 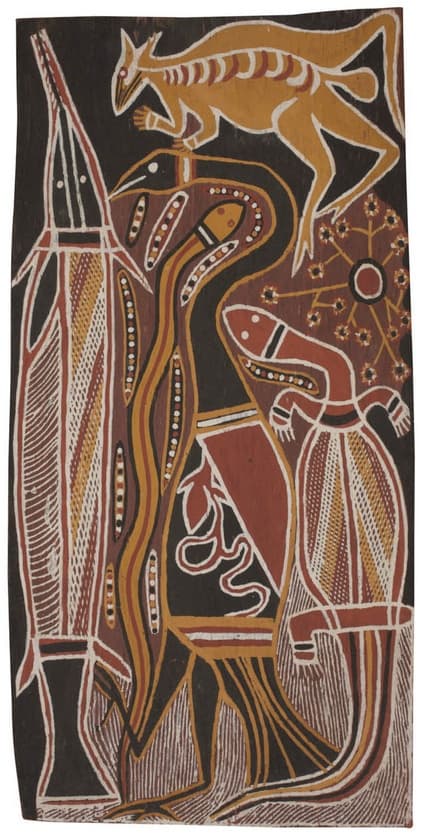 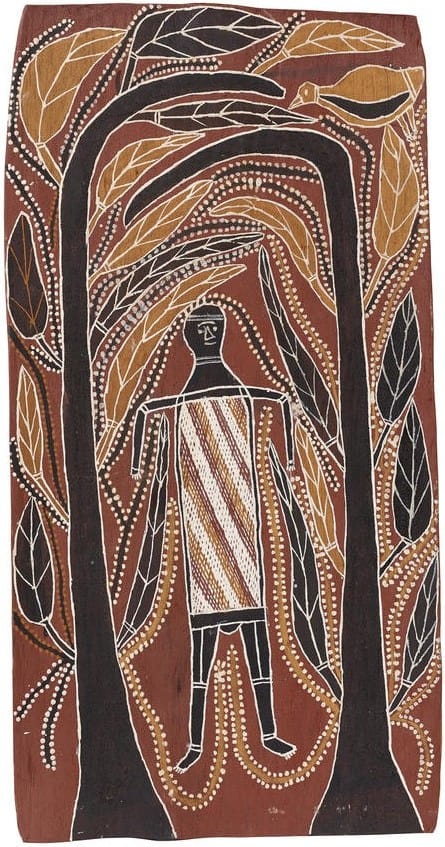 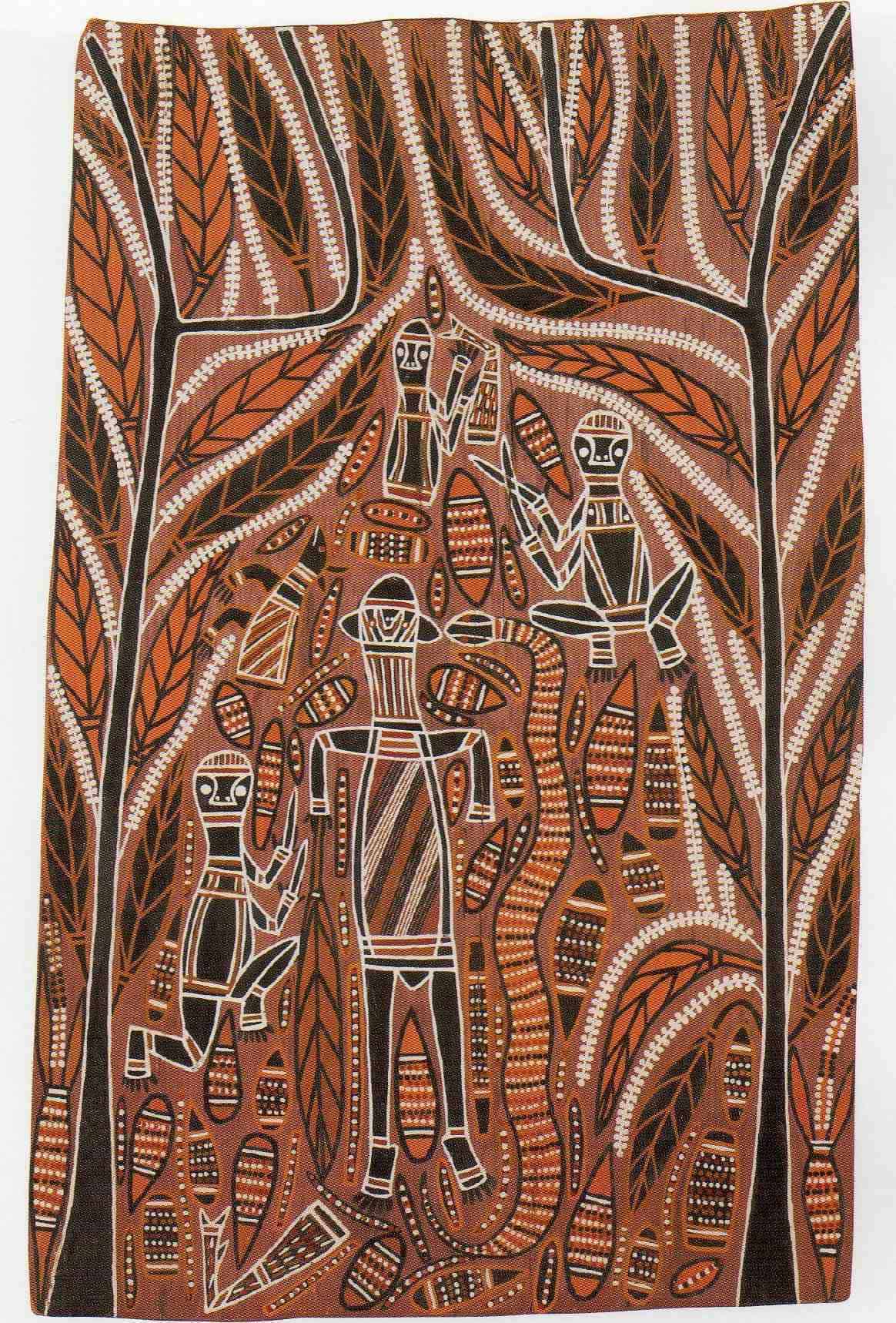 Home Page
Contact Me
Gallery
If this post has been informative please take the time and make the effort to share it on social media. By clicking any of the share buttons below you create a link from your social site to this article. Links are what google uses to calculate what information on the web is useful. By sharing this article you are letting google know you found my article / images of some value. Thanks!
← Jimmy Wululu