Cave painting exist throughout Australia from Arnhem Land in the North to Tasmania in the South. People have lived in Australia for over 50,000 years and have been painting stenciling and carving onto rock walls for at least 40’000 years.

Australia due to its climate has the most diverse and extensive galleries of cave painting anywhere on earth. Australia has more Cave paintings and rock art than the rest of the world put together. The rich artistic variety of these Neolithic masterpieces is best explored through images.

Aboriginal cave paintings are a record of some of mankind’s earliest spiritual beliefs. The art is also a record that even 40,000 years ago mankind had amazing artistic ability. 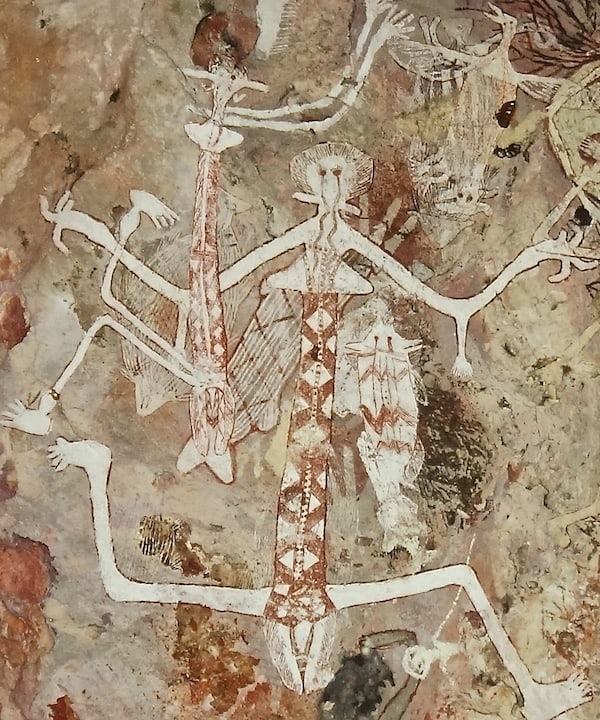 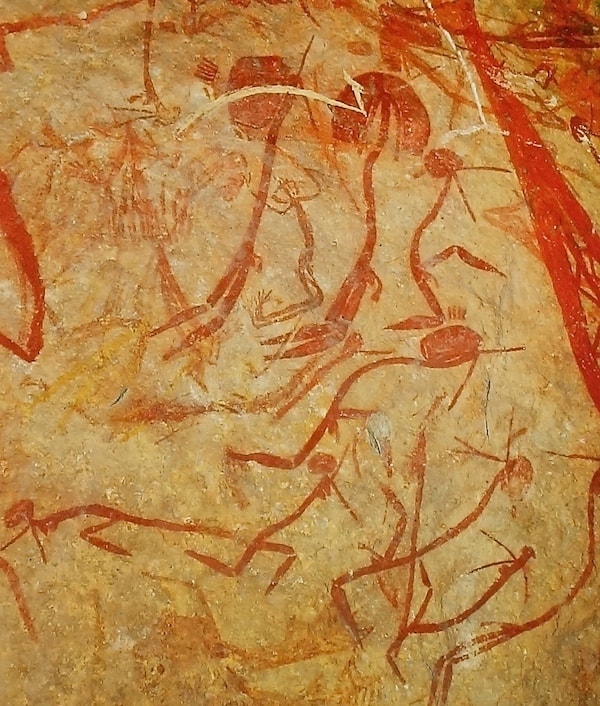 Aboriginal Australia was never a single homogenous culture. When the Europeans arrived there were over 700 language groups and hundreds of cultures. These cultures like everywhere else on earth were not completely static therefor have evolved over time.

Over the millennia the meaning of some cave art has become lost. Other cave paintings are still an important part of aboriginal culture today.

How old is Australian Cave paintings

Australia Rock Art is older than several ice ages. Many examples are now lost under the sea due to rising sea levels at the end of the last ice age.

Indonesia has the oldest cave paintings in the world and is of the same style as the oldest styles found in Australia. Mankind migrated out of Asia and traveled all the way to Australia when ice age sea levels were much lower. They were responsible for early hand stencil cave paintings and large dash filled animals. 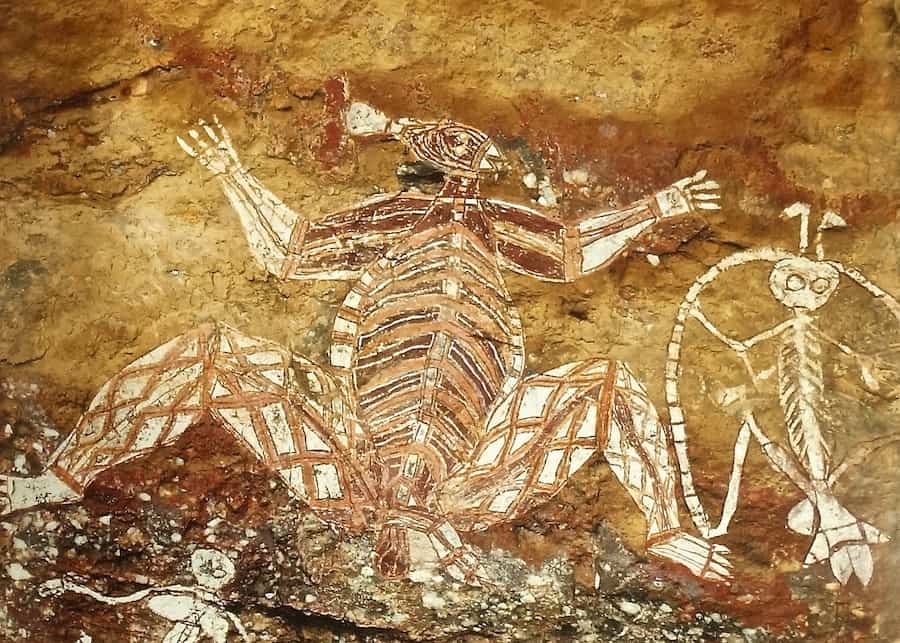 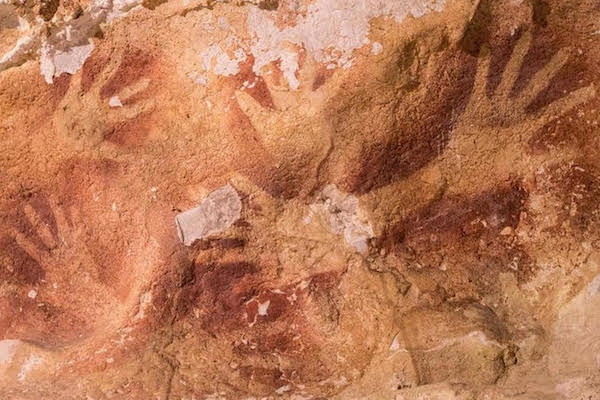 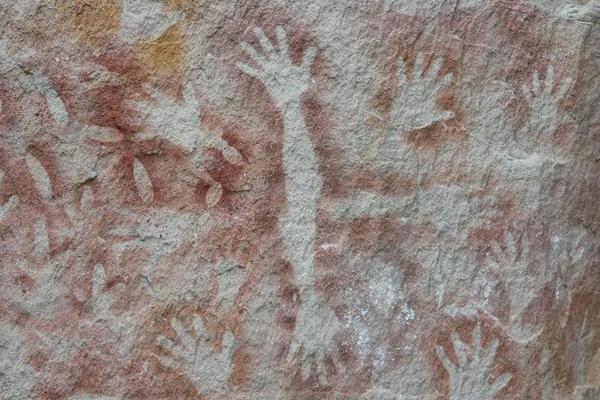 Not all rock art are cave paintings. Rock art was also made by chiseling or hammering into the surface of the rock to make a design called petroglyphs. The Pilbara Rock art province, for example, has no paintings but has over 1 million petroglyphs. 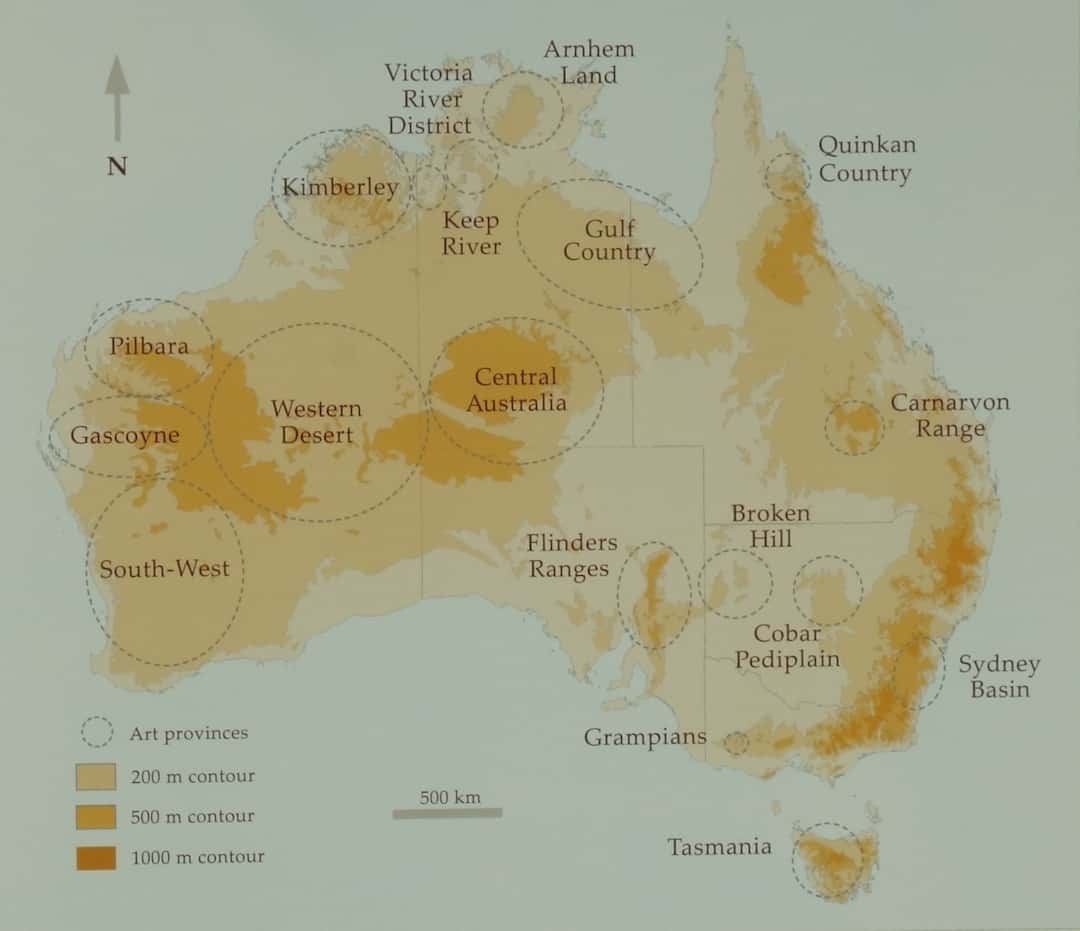 Kimberley cave painting is best known for its haunting alien-like Wandjina figures. This is also the area where the enigmatic Bradshaw figures or Gwion Gwion.

This area though has a complex sequence of art through time. Cave painting in the Kimberley started 35,000 years ago with hand stencils. There was then a whole series of painting styles right through to Wandjina which are still an important part of the culture today.

A separate articles discusses Kimberley Cave painting and Wandjina is in detail. 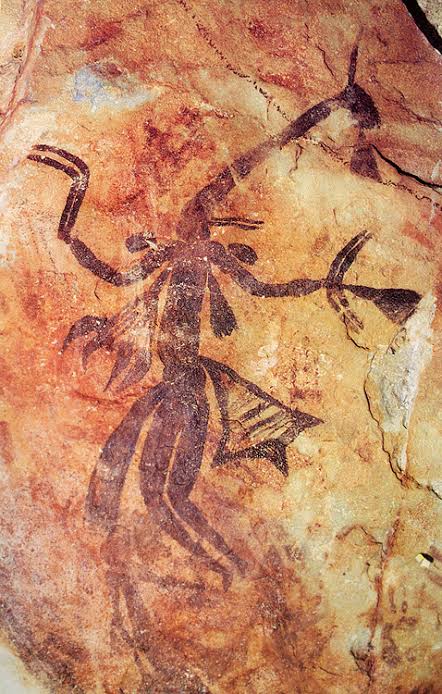 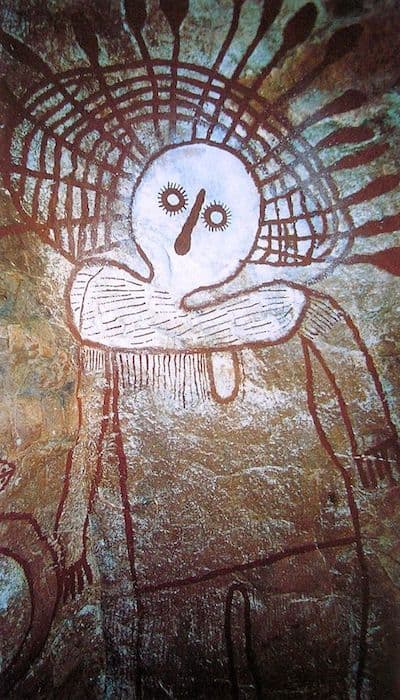 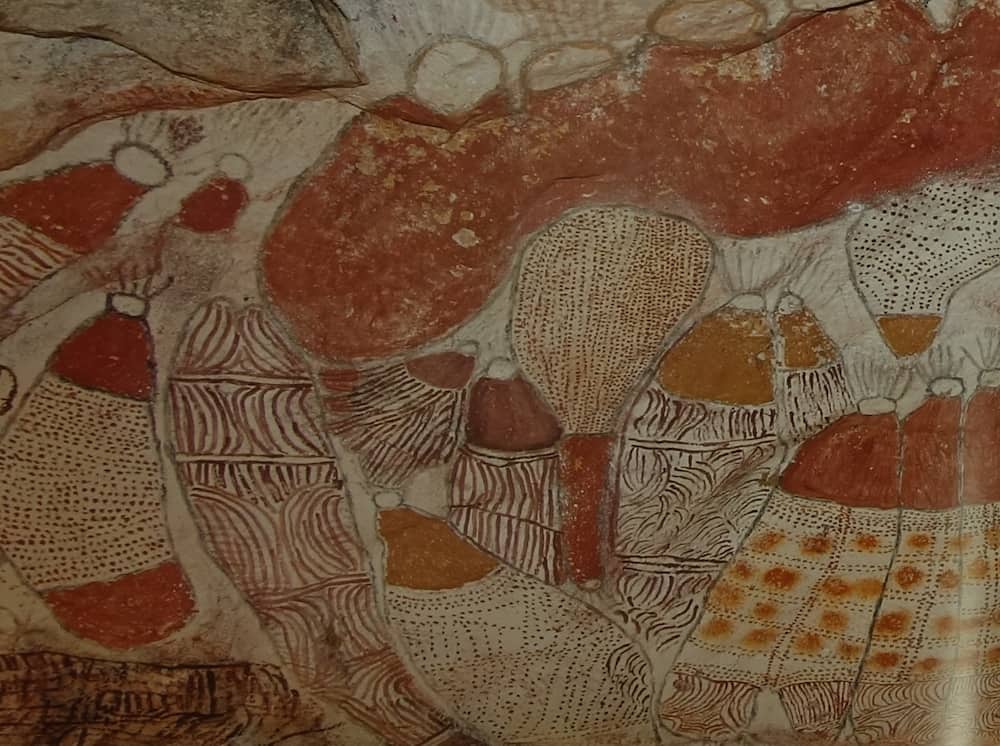 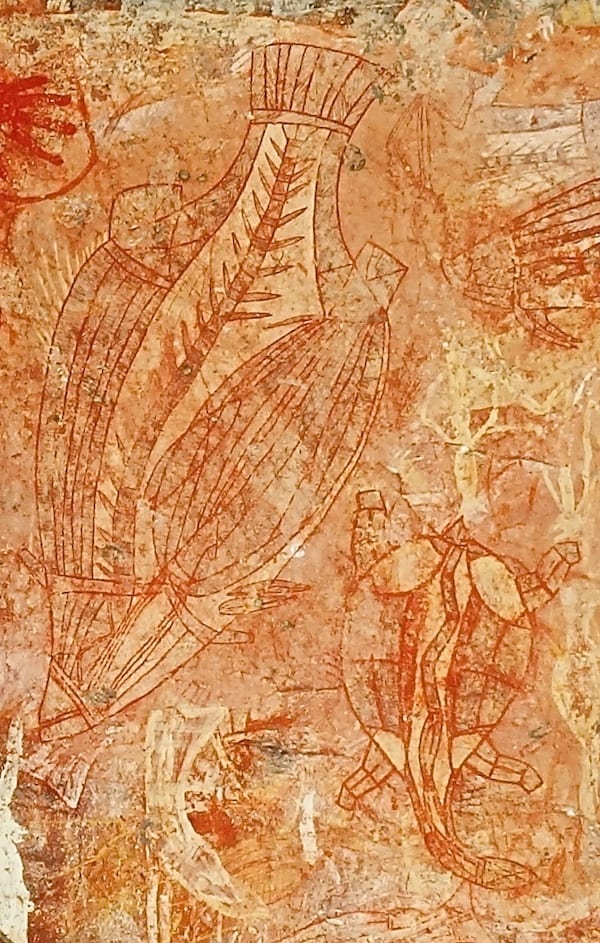 Arnhem Land is best known for its distinctive X-ray art that shows animals and their internal organs. It is also home to Mimih figures which are like elegant stick figures. The well-known X-ray art and Mimih figures though are a part of a more complex sequence of rock art from this area that stretches back 25,000 years. The oldest art is of painted animals and extends right through to depictions of steamships and Indonesia sailing vessels.

This is the traditional land of the Wardaman people and best know for depictions of the lightning brothers. The caves also contain images of sorcery figures with impossibly flexible arts and legs. These sorcery figures are like those by Namatbara and Mijau Mijau on Crocker island further to the North.

This area is also known for anthropomorphic petroglyphs. These petroglyphs have concentric circle eyes and are like petroglyphs found in the Pilbara and central desert. 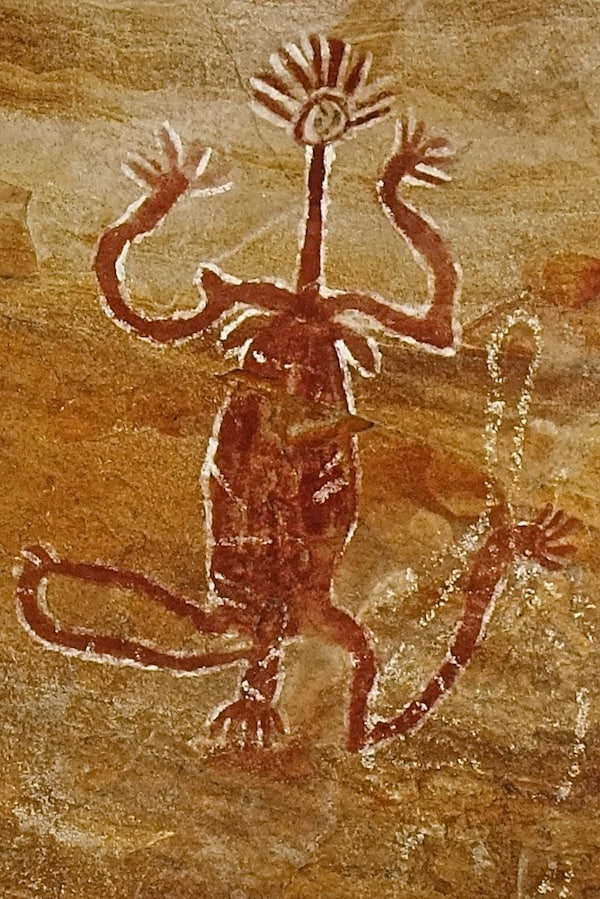 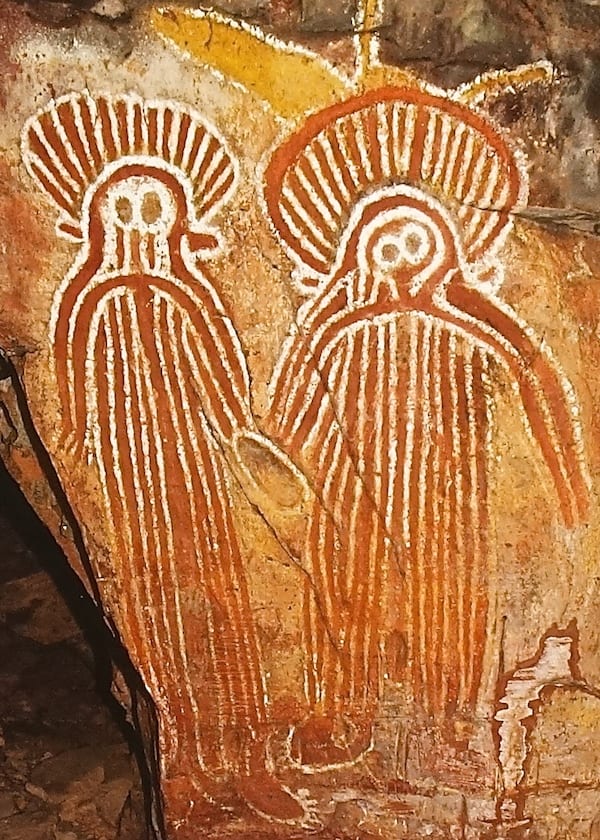 The central and western desert are the only area to have petroglyphs on small flat oval pieces of stone called stone churinga. These stone churingas are sacred items and told the story of the Alcheringa spirits travels.

Much of the other rock art and cave paintings are in places where ceremonies related to the alcheringa spirits were held. Many of the designs found in cave paintings and petroglyphs are the same as those used on stone churinga. They are expressions of parts of the same sacred stories. 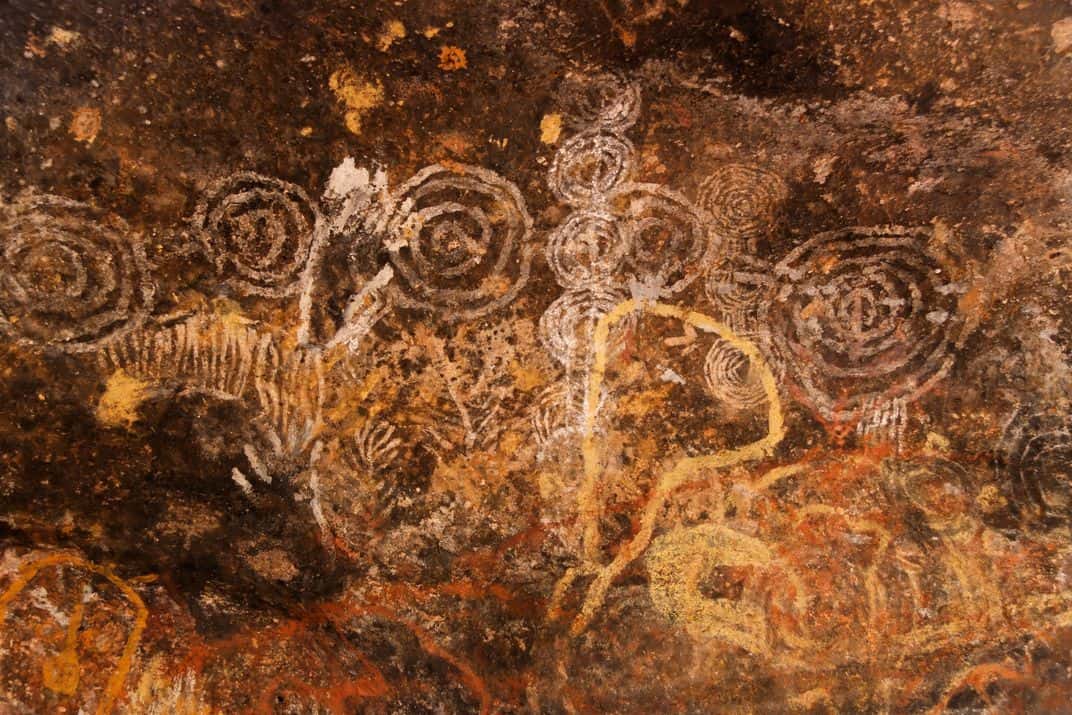 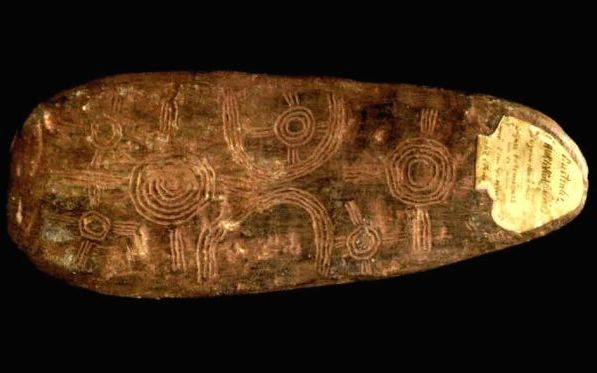 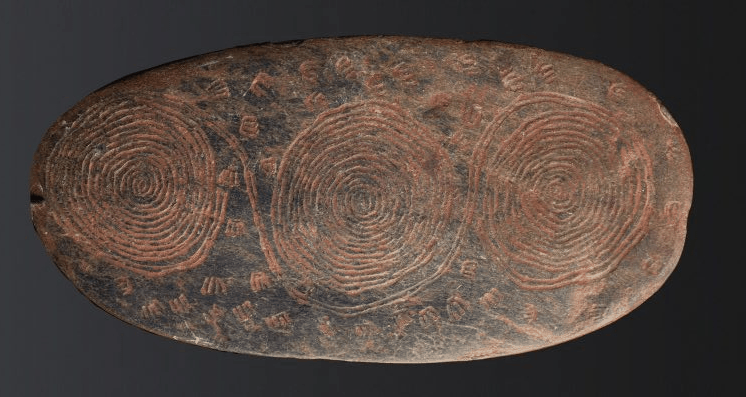 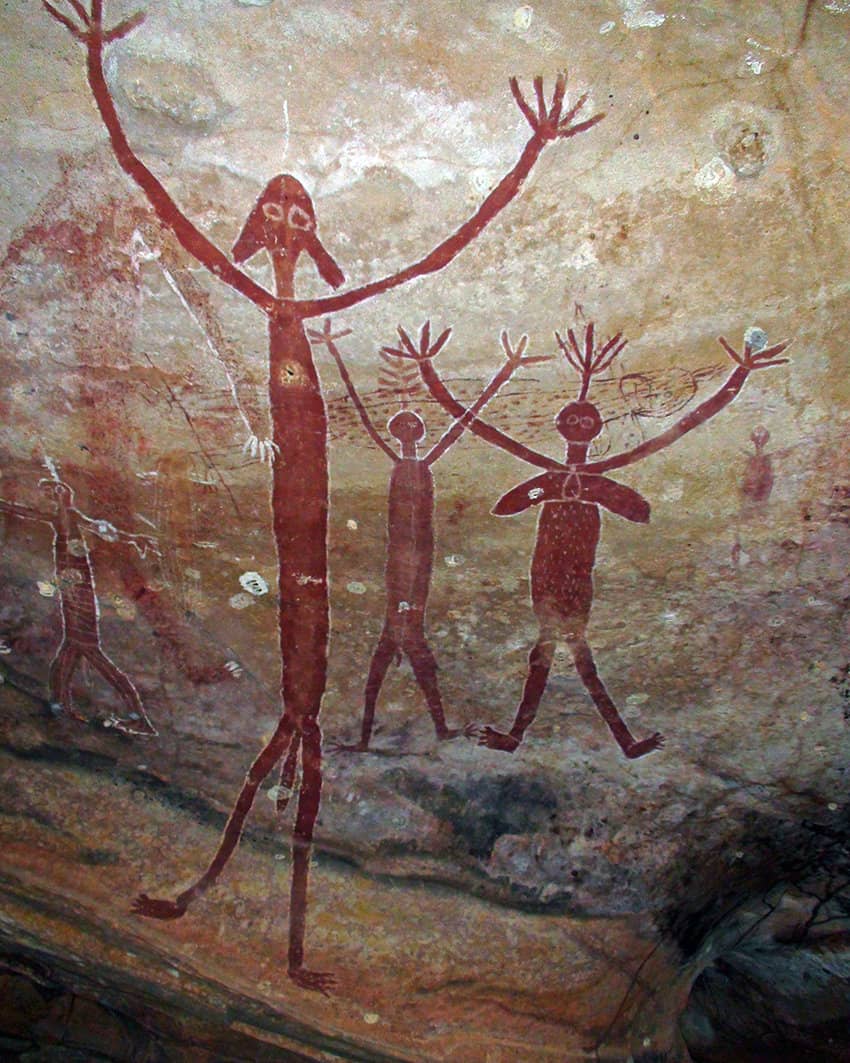 European settlers moved into this area due to a gold rush of 1873. As a consiquence very little is known about the meaning of the cave paintings in this area. Over 1000 sites are identified of which the best known are the Quinkan spirit figures.

Knowledge of this areas rock art owes much to Percy Trezise

Cave painting at Carnarvon Gorge is predominantly stencil paintings and also painted nets. Stencils were produced by placing an object (mainly hands or weapons) against a surface and then spraying ochre by spitting it through your mouth. Carnarvon Gorge has some of the best examples of Neolithic stencil art anywhere worldwide. This area has had human habitation probably for at least 19000 years. 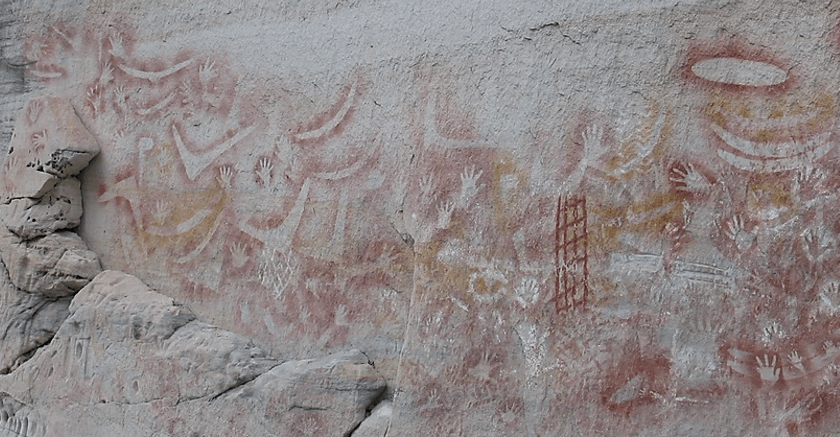 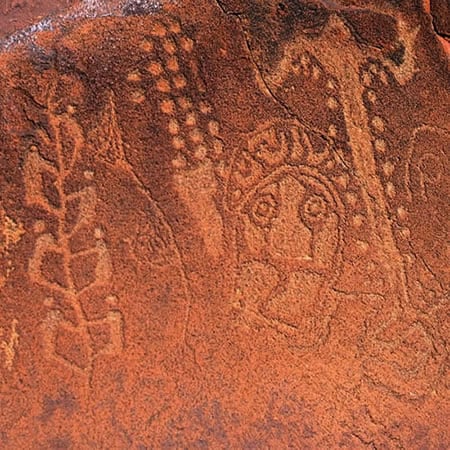 The Pilbara has a million petroglyphs or even more. Petroglyphs made by chipping and hammering away the iron oxide coating on rocks to reveal the lighter color below. Petroglyphs are of animals people hunted and spirit beings. This area has had Aboriginal occupation for more than 41000 years.

Some of the animals depicted were already extinct before European colonization. Most famous of these are depictions of Tasmanian Tigers and mega fauna that have been extinct in this region for 10,s of thousands of years. Some of the petroglyphs could be up to 30,000 years old. 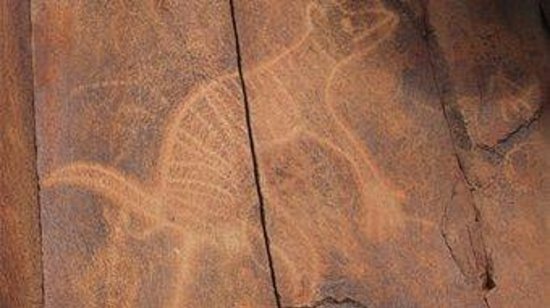 Australian Cave paintings and Rock Art are found all over Australia. They are different styles in different areas. These truly are not only national treasures for all mankind to appreciate because they give us an insight into our distant artistic past.

I can not cover all the different types of Aboriginal Rock art in a single article. I have covered the cave paintings and rock art that most fascinate me but other authors would undoubtedly have covered different areas. 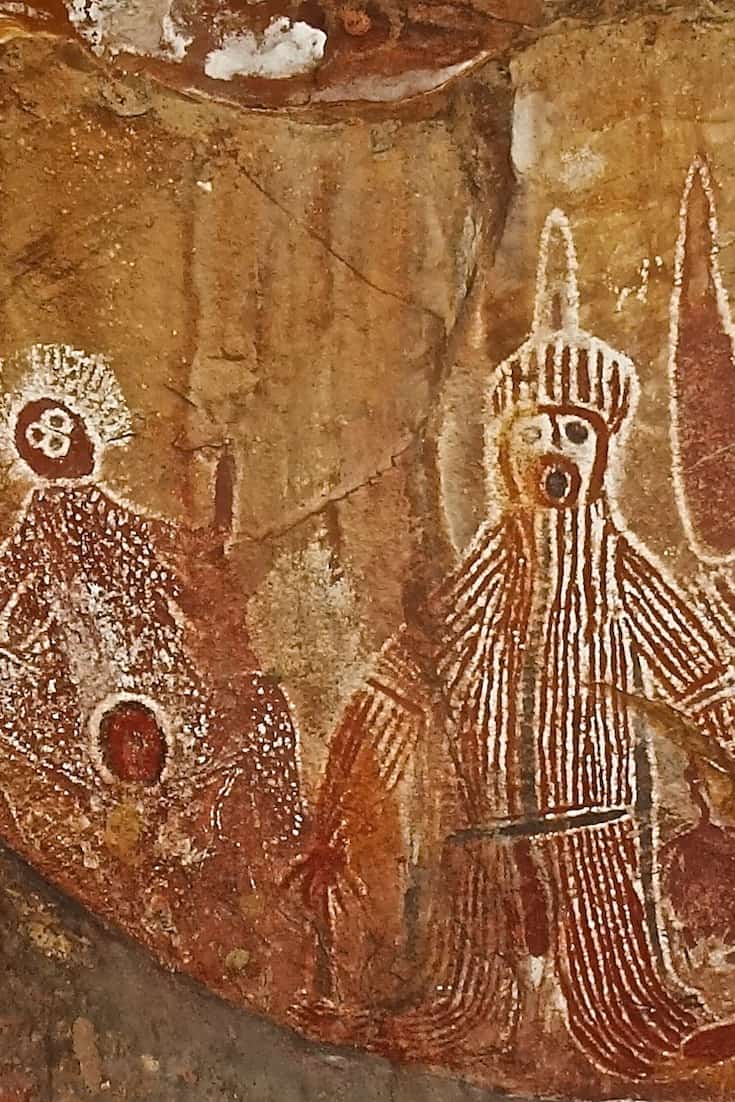 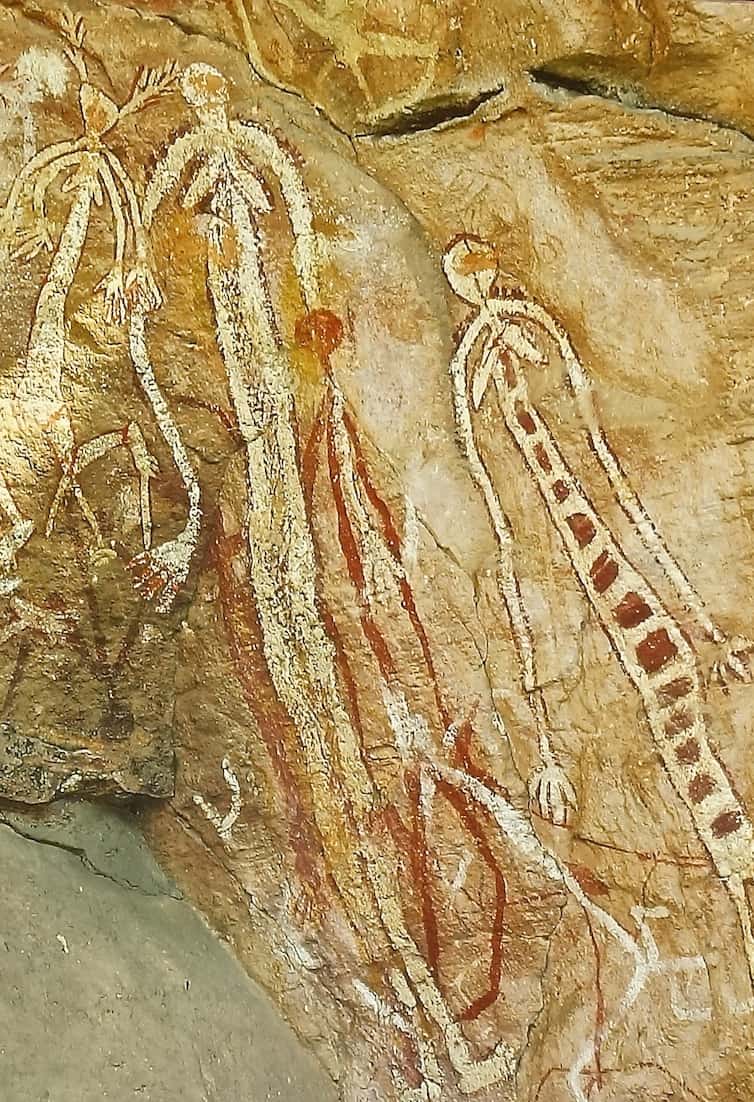 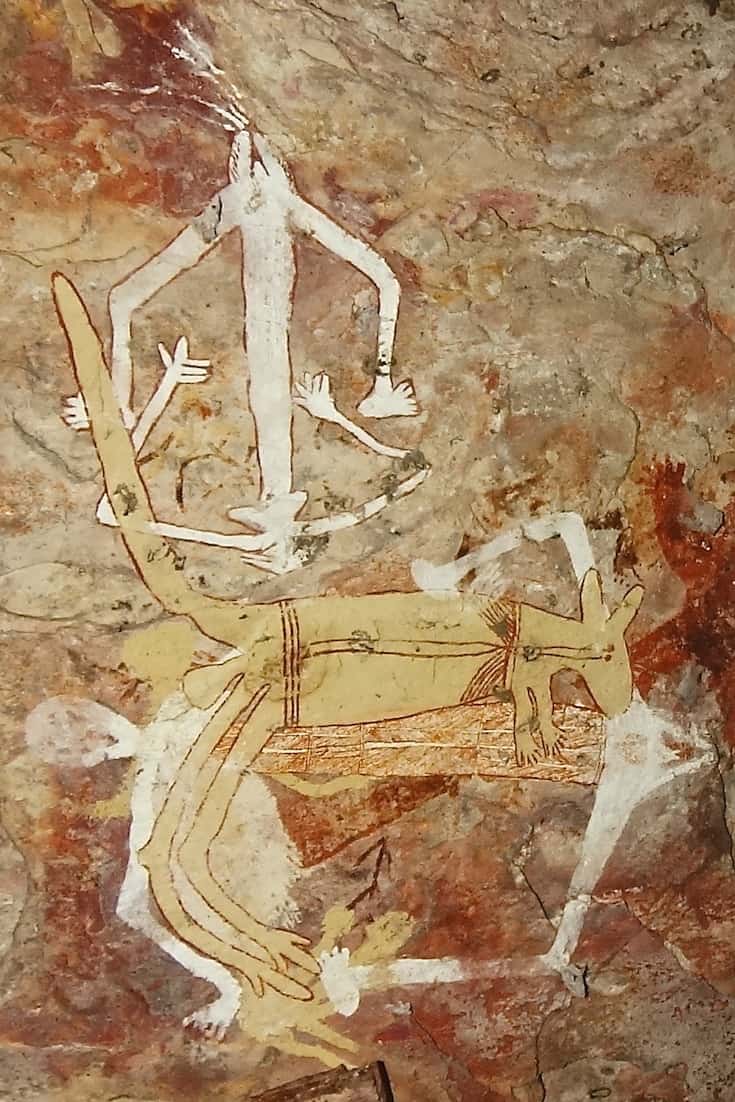 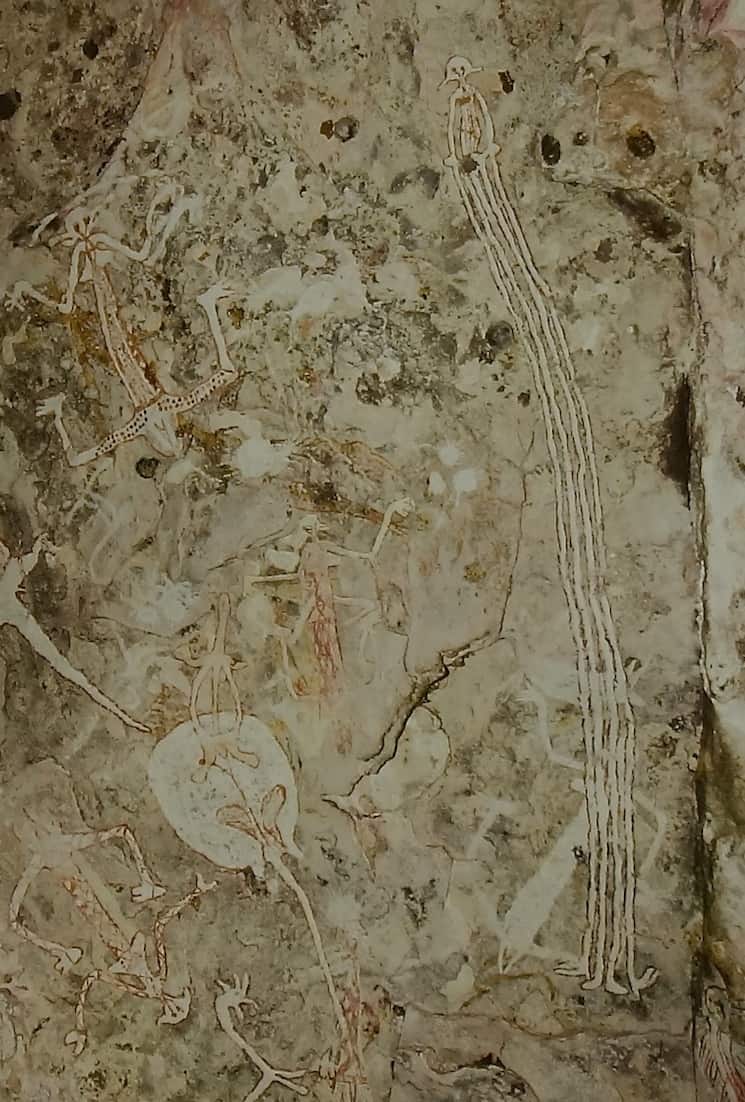 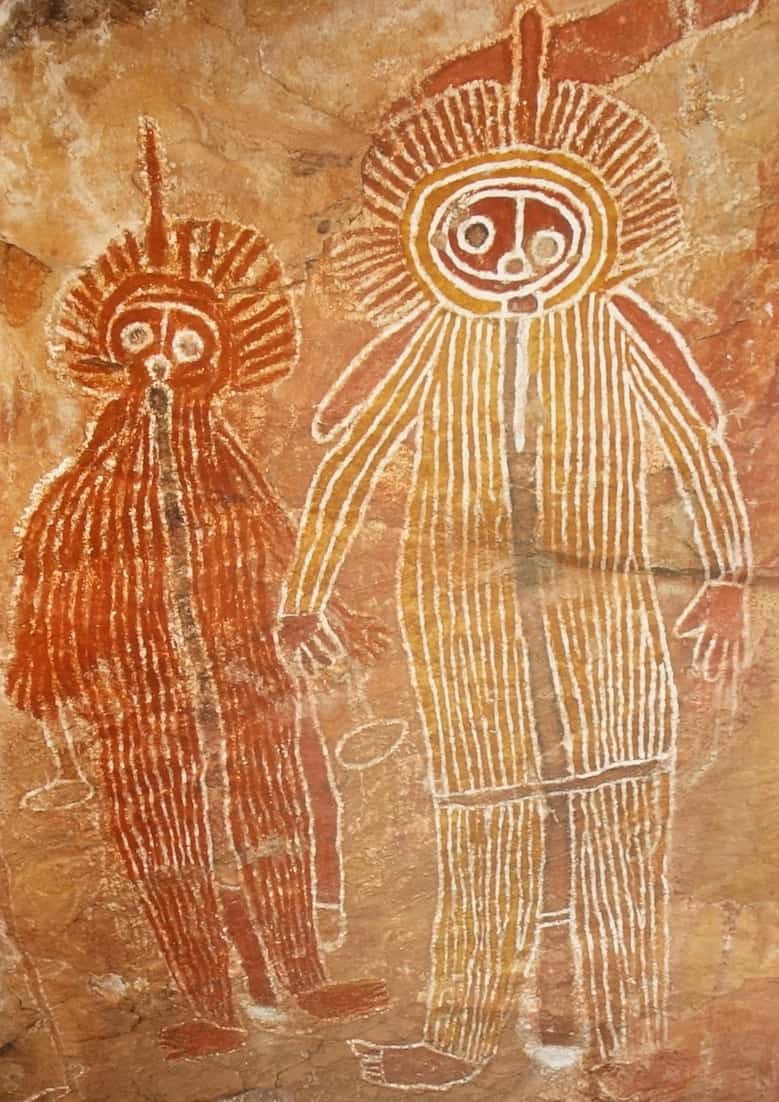 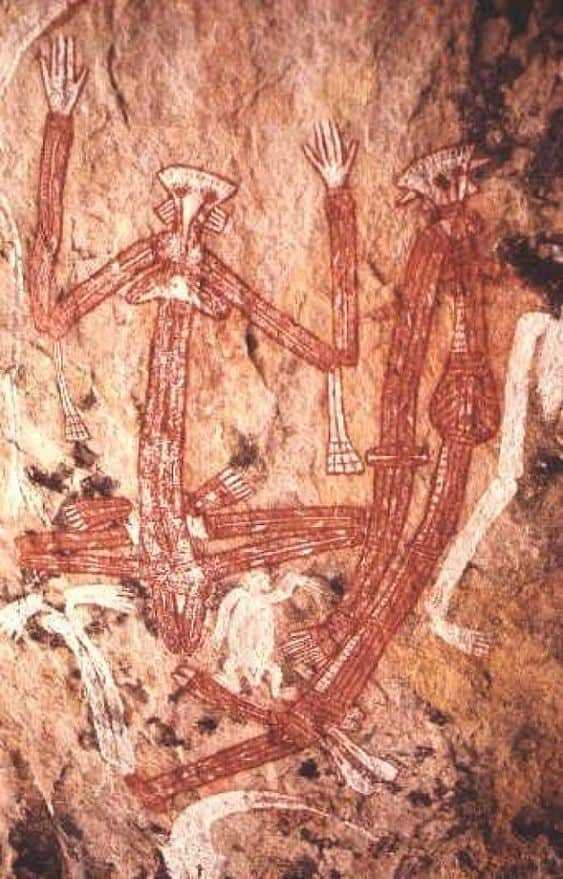 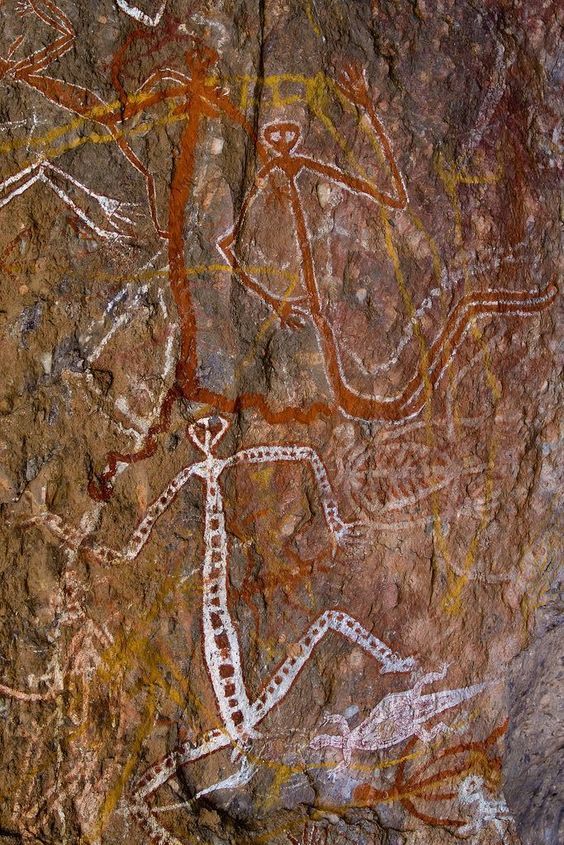 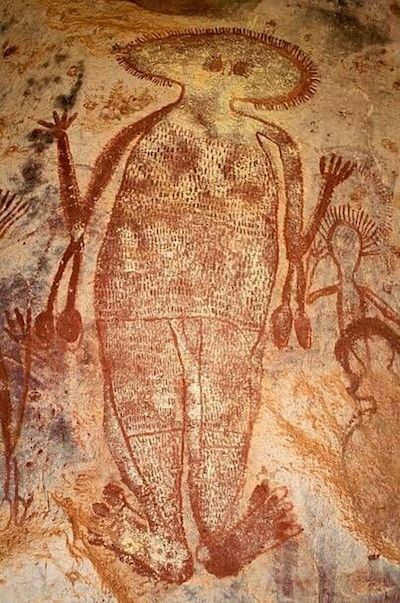 contact me
home page
Sell
Early Papunya Artists
If this post has been informative please take the time and make the effort to share it on social media. By clicking any of the share buttons below you create a link from your social site to this article. Links are what google uses to calculate what information on the web is useful. By sharing this article you are letting google know you found my article / images of some value. Thanks!
← Oenpelli Bark Painting Arnhem Land Rock Art →